I’m not sure I feel quite right about reviewing The Bourne Supremacy. After all, I had to watch a good third of the movie with my eyes closed. Why, you ask? Was it scary? Gruesome? Did Barbara Hershey suddenly appear a cameo? No.

You can thank director Peter Greengrass’s affection for nausea-inducing hand-held camerawork for my averted eyes. Let me put it to you this way: the action onscreen was so herky-jerky, so bouncy, so out of control that it makes The Blair Witch Project look like it was filmed with a Steadi-cam. I had to look away or risk heaving. 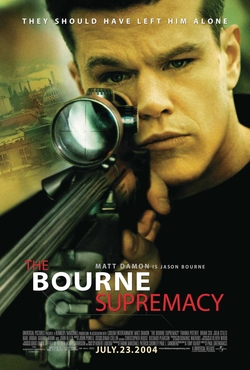 As for the movie itself…

The plot is a fairly thin one, but one that provides a nice thread onto which the filmmakers pile heaps and heaps and HEAPS of action. The movie is essentially one, super-extended, multi-location chase sequence. The last time we saw covert agent and sometime assassin Jason Bourne (Matt Damon) he was walking off into the anonymous sunset with his gal pal, Marie (Franka Potente). We catch up with him in this film just as his life “off the grid” is coming to an end. Nefarious folks of varying origin—especially a surly Russian with very poor aim (Karl Urban, last scene scowling and stomping around The Chronicles of Riddick) want him erased. As if that isn’t bad enough, turns out Bourne is also being framed for the murder of two CIA agents in Berlin. Heading up the charge to bring the rogue agent to justice is CIA heavy Pamela Landy (Joan Allen), whose determination is matched only by her striking features and killer turtleneck sweaters. She’s joined by grizzly, soon-to-be-retired Ward Abbott (Brian Cox), who has his own reasons for wanting Bourne in custody.

At this point, it kind of feels like the whole world is out to get Jason Bourne, so there’s nothing left for him to do but clear his name himself and figure out what secrets lie in his buried past. Oh, and run. He does an awful lot of running.

The film has several things going for it. The script is economical and very tight—clever quips, kernels of information leaked out at nice intervals, suspense woven delicately in between the car chases and explosions and fisticuffs. Damon makes for a compelling action hero and seems to be getting better as an actor the older he gets. His Jason Bourne is a tortured soul, weighed down by a mysterious past he can’t remember and a nightmarish present he can’t escape. Joan Allen is a delicious addition to the cast, and Cox—who’s always enjoyable—once again provides solid support. Julia Stiles and Franka Potente each pop up for short onscreen stints, and Chris Cooper even appears briefly in a flashback sequence.

So, a good script, good performances… why only four slices? Because if you make a movie that’s so dizzying it becomes unwatchable, you’ve done yourself a huge disservice. There’s an electrifying car chase in the latter portion of the film that left many audience members agape. Did I see it? No, because fifteen seconds in I could barely stand to look at the screen. I can understand the desire to have the audience “experience” the stomach-churning effects of fleeing for one’s life, but to literally make them ill in the process? No thanks. 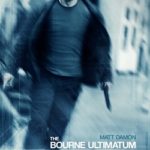