Jeremy Piven better be careful with his movie-hair, because he is this close to starting an unfortunate collection of Nic-Cage-like goofy cinema ‘do’s.
By Lindaon February 8, 2014
0 Comments
Our Rating 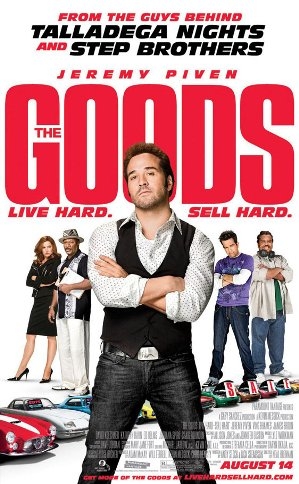 The Goods: Live Hard, Sell Hard is one of those movies that either has you at the start or, well, doesn’t. If you are not sold on the smooth, crass schtick of the movie from the beginning, there is little in the rest of the film to win you over. So, raise your hand if you find this appealing for a movie…

Jeremy Piven stars as Don Ready, who promises on his business card that he can sell your cars, motherfucker. No, really. Hahaha… it says “motherfucker” on his business card. If you cackled at that, well, SOLD! You’ll probably be in the group of college boys who laughed throughout the film. If you didn’t laugh, or maybe tried a weak smile at the joke, you’ll be like me: Tired before the movie gets rolling, wishing you HAD decided to drink before the film, and astonished when all was said and done that The Goods actually clocked in at UNDER an hour and a half (how is that possible? I was so tired of the movie soooo long before that!).

James Brolin slums as a struggling car salesman who calls Don Ready and his merry band of salesmen (the “men” part is constantly emphasized even though one of the team is clearly a woman) to swoop in and do whatever it takes to save his business. Don Ready and his pals take up the challenge to sell all the cars on the lot over the Fourth of July Weekend. Do you think they can do it? Do you? Do you? Do you think they can band together against all odds so that Jeremy Piven can kiss the salesman’s hot daughter (Jordana Spiro) over the closing credits (even though she was repulsed by his advances at the beginning, AND has a fiancé)? Guess. Go on. Oh, what? I already fell asleep.

The Goods: Live Hard, Sell Hard is not a complete and utter failure, despite all. There are a few genuine laughs in the film, and most of them come courtesy of Kathryn Hahn as one of Ready’s “salesmen” named Babs. She got the only lines that made me cackle with surprise, but unfortunately for her, even she had more misses than hits. With talent like Ving Rhames, David Koechner, and Charles Napier in the cast, there is so much talent gone to waste with half-assed one liners that would have been funnier in a Will Farrell movie (But, d’oh! There’s Will in a cameo, one of the few other laughs in the movie). The Goods tries for over-the-top crass political incorrectness, but with its soft underbelly just comes across as uneven and all over the place.