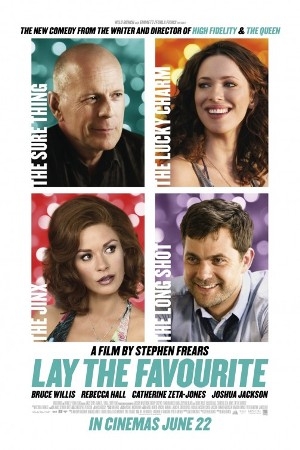 You would think that a gambling movie that kicks off with “Unskinny Bop” would be pretty fun, especially with smarmy favorites like Bruce Willis and Corbin Bernsen in the cast, but Lay the Favorite is awkward from the get-go. After a few minutes, you find yourself mumbling, “Oh God, this so BAD.” You will continue saying these words throughout the course of the movie.

Rebecca Hall stars as Beth, a ne’er-do-well struggling to make it as a private dancer in Vegas. After one too many weird encounters, she decides to raise the bar and become a cocktail waitress. Instead she winds up working for Dink Heimowitz (Bruce Willis) in the field of sports betting. Though utterly inexperienced, Beth serves as a good luck charm, ending Dink’s losing streak and leaving him with hope of getting his business back in the black. The only problem, it seems, is Beth’s total inability to behave appropriately. With her cheap tank tops and super short denim skirt, Beth wastes no time slinking into Dink’s personal bubble and batting her eyelashes, which, unsurprisingly, evokes the ire of Dink’s wife Tulip (a used-looking and over-the-top Catherine Zeta-Jones).

To hear her tell it, you’d think Beth and Dink were soul mates with a long and meaningful history, but after knowing each other what could only have been a matter of weeks, Dink is forced to fire Beth in order to appease Tulip. And then Beth, is, like, bereft, cause she and Dink go back, like, days and how can she go on without him? They flirted playfully! He gave her a paycheck and she didn’t even have to strip for it! Stupid Tulip! Stupid world! Stupid movie!

After complaining to her dour friend (Laura Prepon as a hooker with a terrible Southern drawl), Beth starts to return to the only profession she knows. It’s not quite prostitution, but sort of…picking up guys who pay her to do suggestive things? Except she meets this guy (Joshua Jackson) in a casino, who she decides is sweet and good and amazing after a two sentence interaction and then she’s all do-or-die over him.

Here I just have to stop and explain that Rebecca Hall is so awful as Beth that the banal nature of the plot is almost not worth mentioning. She’s shrill and annoying and clingy and cloying and she gloms onto new people and prospects so quickly and with such hooks that it’s hard to even watch her, much less sympathize or root for her character. By the time she finds herself working for rival odds maker Rosie (Vince Vaughn) in New Jersey, it’s really hard to care about Beth’s “next big thing”. Soon she finds herself facing legal trouble, but if the stakes are high, the audience never feels it. Though based on what must have been a tumultuous but triumphant true story, Lay the Favorite fails to resonate in every way. 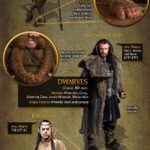 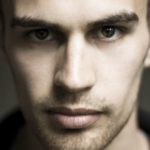