Though almost all of the action is set in 1971, the subject matter and themes of director Steven Spielberg’s latest cinematic slice of history will no doubt resonate strongly with present-day audiences, given the political climate in the U.S. today. 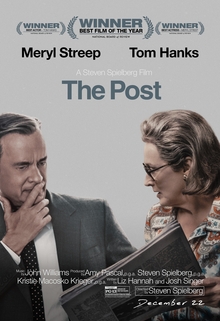 Meryl Streep stars as real-life publisher Kay Graham, who “inherits” the reins of the Washington Post after the death of her husband. Regarded by the boys’ club of men who make up the paper’s Board of Directors as something of a joke, Kay soon finds herself smack dab in one of the most shocking and important journalistic battles the country has ever seen: the discovery of, and fight to cover, the notorious Pentagon Papers, which detail decades of cover-ups regarding the Vietnam War on the part of the American government.

Leading the efforts to have the Post publish excerpts of the Papers is fiercely determined editor-in-chief Ben Bradlee (Tom Hanks), a hard-nosed newsman who believes the American people have a right to know exactly which truths an array of presidents have withheld from them. Bradlee watches as his colleagues at The New York Times are hit with injunctions from no less than the office of the U.S. President himself, and is then faced with one of the biggest dilemmas of his career: publish, and risk prison time and charges of espionage (like his peers), or submit to the pressure from the government and suppress vital information from the public.

Well-acted, masterfully told and filled with more high-profile talent than you can shake a Supreme Court at, the film proves once again that Spielberg is a top-notch storyteller. The drama unfolds slowly and meticulously, with just the right degree of intrigue and suspense – not necessarily an easy feat considering the world kind of knows how the whole thing turned out. But the level of risk incurred by everyone involved in the decision-making is made nicely palpable.

Of course, having a pair of Oscar® winners head up the cast doesn’t hurt, either. Both Streep and Hanks are strong, with the former conveying the profound uncertainty that masked Graham’s ultimately steely resolve, and the latter turning in a nice performance as a grizzled news veteran willing to lay it all on the line in the name of journalistic integrity and exposing rampant corruption. Every supporting role is likewise filled out with stellar talent, from Sarah Paulson as Bradlee’s wife to Tracy Letts as Kay’s trusted attorney and Better Call Saul’s Bob Odenkirk as reporter Ben Bagdikian, the guy who literally transported copies of the highly classified documents right to Bradlee’s doorstep.

From the filmmaking to the acting, The Post just works. And in the age of Donald Trump, his vitriol for the media and his repeated claims of “fake news!,” its frightening story is one that everyone needs to see.

The Post Blu-ray release includes a few meaty and quite interesting extras that delve into “Layout,” “Editorial,” and “Style” (clever!) as well as music and the production process. The interviews are quite fascinating, as many of the key players are still around, including Daniel Ellsberg, who leaked the Pentagon papers to the press. Some of Graham’s adult children also offer insight into their home life with their publisher mother, and her right hand man Ben Bradlee. There are also revealing tidbits about the recreation of the Washington Post‘s newsroom (which is a version just before it was remodelled for the All the President’s Men era), as well as finding an era-authentic copy machine that the filmmakers weren’t allowed to plug in for the film as it would most likely catch fire. Oh, the pains and danger that we were in before modern technology!