Denzel Washington’s great performance anchors this sprawling biopic which is as relevant as ever.
By Lindaon September 23, 2013
0 Comments
Our Rating 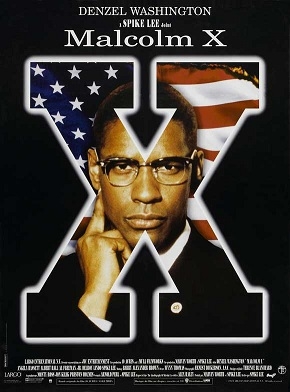 Spike Lee’s sprawling labor of love Malcolm X was released in 1992, the same year as the explosive race riots prompted by the beating of Rodney King by L.A. cops. The film opens with the amateur footage of African-American Rodney King being pummeled by white cops, and for half a second, it seems a little out of place (just like the epilogue of “modern” Nelson Mandela reciting Malcolm X’s words to South African schoolchildren). Seeing Lee’s film 20 years later makes these moments look like just another chapter in the history that Malcolm X spoke so passionately about. It is discouraging to face the facts that though much has changed, many of the problems that Malcolm X preached about still exist.

The film opens with exuberance with young Malcolm Little (Denzel Washington, who deservedly received an Oscar nomination), known as “Red” to his friends, going wild on the streets of Boston in the 40s. The image of Denzel and Spike Lee (as his pal Shorty) strutting down the street in their outrageously colored and tailored zoot suits is truly a sight to behold. In no time, these cocky young men are getting in trouble, dating white women, dealing drugs, playing numbers, robbing houses, and becoming small-time gangsters. They get arrested after a robbery, but it is their canoodling with white women that gets them the hardest prison time.

During his prison stint, Malcolm goes from cocky to broken. One day he decides to listen to the preaching of one of the other prisoners, a man who espouses the Muslim teaching of one Elijah Muhammad. Suddenly, Malcolm sees the light, changes, and becomes a disciple. Upon release from prison, Malcolm becomes a member of Elijah Muhammad’s Nation of Islam, an African-American conservative religious order known as much for its strict personal guidelines as it was for the heated racial discussions they provoked. Specifically, Malcolm’s dynamic and opinionated preaching style puts him in the forefront of the Nation of Islam’s public image. At first, this gives the group great visibility, but as the racial separatist tones of Malcolm X’s speeches become more controversial, it causes a rift in the order. When Malcolm X is effectively booted from the Nation of Islam, he finds that his greatest threat may not be from racist whites, but from his own brothers of the Nation of Islam.

Based on “The Autobiography of Malcolm X: As Told to Alex Haley”, Malcolm X follows the tried and true mostly-linear timeline of epic biopics. At over 3 hours, at first I felt the story was taking its time. The man doesn’t even get to prison until after the first hour of the film. It establishes that Malcolm Little really was on a road to nowhere before changing his ways. He was a gangster, a thug, and kind of a self-righteous prick honestly. Much of this changes (and some doesn’t) on his journey, showing his as a flawed every man who set an example. Listening to his speeches now (putting aside his more controversial statements), I could only imagine that a leader like this could still do a whole lot of good these days. Young people, especially young men, could learn a lot from Malcolm X. This film does its part to shed light on a man who is often portrayed at the bad boy civil rights leader that history paints in the shadow of MLK.

Along with commentary tracks by director Spike Lee, cinematographer Ernest Dickerson, editor Barry Alexander Brown and costume designer Ruth Carter, there is also a more palatable and fascinating half-hour making-of doc “By Any Means Necessary” which chronicles the controversy, budget issues, and timeliness of the film (which was originally going to be directed by Norman Jewison before young, hot director Spike Lee convinced the producers that he was the man for the job). There are 9 deleted scenes, most of which are not missed (though it is fun to hear Lee’s glee at having rediscovered them after all these years). There is also a trailer, and a 40-page glossy color booklet that is mostly fluff and photos from the film. Best extra is the bonus DVD which includes the 1972 Arnold Perl documentary Malcolm X, with original footage of the man. This is the kind of stuff that you’d want to see out after watching a biography like this one, so it is a real treat.