Once you get past the sheer cheesiness of the production, the story itself is kind of intriguing.
By Jenniferon September 23, 2013
0 Comments
Our Rating 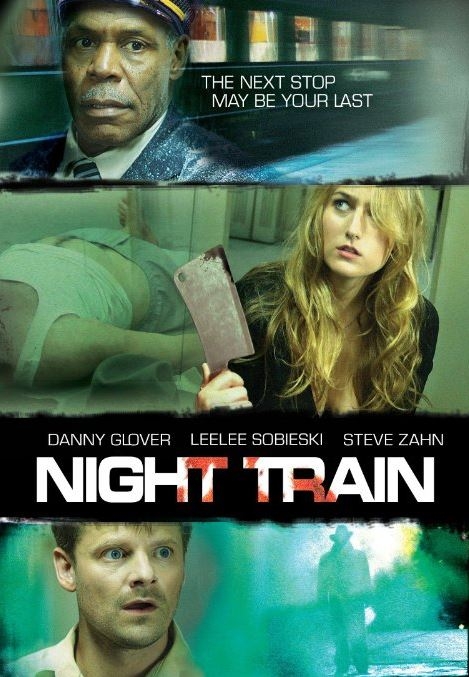 Despite the fact that I flat-out couldn’t finish The Polar Express and have no idea how it ends, I feel like Night Train would make a perfect sequel.  It’s a creepy, Christmasy tale set entirely on a train, and the low-budget sets give you the impression that you’re watching some sort of live-action/animation hybrid.  Once you get past the sheer cheesiness of the production, the story itself is kind of intriguing.  It walks the line between decent suspense thriller and so-bad-it’s-good B movie.

Just before the Night Train departs, a strange man (David Paymer) makes a last minute attempt to get on board.  After some discussion, Miles the conductor (Danny Glover) allows him to hop on.  It’s dark and it’s snowy and it’s Christmastime, and it seems only right to help the poor schlub get where he’s going.  Big mistake.

The man settles into a car with Chloe (LeeLee Sobieski) and Peter (Steve Zahn), then promptly drops dead in his seat.  Chloe and Peter alert Miles, but the plot thickens when they peer into a mysterious wooden box on the man’s lap.  “Diamonds!”, Peter whispers, and as far as the audience knows, that’s exactly what’s inside.  At the very least, we know that the box’s contents could change their lives forever, but one question remains.  How do they make a dead man and his box-o-magic disappear.

From the get-go, Miles is all for reporting the death immediately and taking care of things at the next stop.   Peter suggests that they drop the body out of the train while crossing a bridge and pretend that they never saw the guy.  The treasure will be theirs free and clear.  While they’re debating their options, Chloe takes the bull by the horns and makes the obvious choice—to chop up the body with a meat cleaver and stuff him into a trunk.

This is a jarring development to say the least, though one executed rather oddly by an emotionless LeeLee Sobieski who remains cool as a cucumber regardless of what shakes down in the movies she’s in.  As a medical student, Chloe is comfortable with the notion of cutting people up, but it’s pretty funny when she offers to stab Peter in the “carrot-id” artery if he screws with her plan.  Perhaps she’s never heard the big words in her anatomy textbooks spoken out loud.

As the movie progresses, the situation on the train gets more and more out of hand.  The passengers turn on one another, more lives are lost, characters with secrets emerge from other cars.  Honestly, it’s fairly interesting, but I’m still not sure if it’s because the story itself is kind of cool or because the execution is (pardon the pun) a train wreck.  One minute you’re all caught up in the weird events unfolding on-screen, the next you’re laughing at someone’s bad acting, or pointing out the fact that the trains used in long shots are clearly models… possibly leftover from someone’s childhood and set up in a basement.  Turning on Night Train is sort of like looking into that freaky box, once you’ve done it, it’s hard to turn away.