If Sam Gerald didn’t let the fugitive get away, we wouldn’t have chases involving crashing 727s and little boats and trains and cars and grain silos and cemeteries and rooftops and on and on and on. 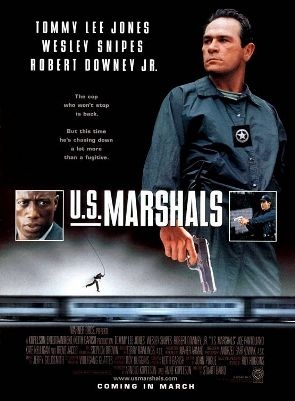 If there’s one thing we learned about Chief Deputy Marshal Samuel Gerald (Tommy Lee Jones) in The Fugitive, it’s that he can really put on a chase. The thing is, the more he chases fugitives, the more I’m starting to think he’s not all that good at catching them. It took him 130 movie minutes to catch Dr. Richard Kimble (who never even did anything), and it takes him 131 movie minutes to catch Mark Sheridan (Wesley Snipes) in U.S. Marshals. I call that a fail.

Sam Gerald really has no problem breaking protocol or slapping around a prisoner in handcuffs. He mouths off and grandstands all day long, letting us know how tough and impatient he is and how we’re boring him and he’s better at everything than we are. But the funny thing is, if Sam’s such a big shot, how come the fugitive is still a fugitive? How come he’ll come face to face with the bad guy in scene after scene and suddenly, “there goes the prisoner”? For goodness’ sake, Sam, if you’re so damn good at your job, just ambush the bastard! Get all your guys to surround him and jump on him and just pistol-whip him in the swamp. Or is it easier to be big man on campus when the perp is already chained down???

When you get right down to it, Sam Gerald is not a super likable guy. He’s not especially vulnerable or sweet, and the more chasing that goes on, the more you want to make fun of him. “Just shoot the bad guy, Sam! Throw a brick at his head! Don’t let him get away AGAIN.”

But if Sam Gerald didn’t let the fugitive get away, we wouldn’t have chases involving crashing 727s and little boats and trains and cars and grain silos and cemeteries and rooftops and on and on and on. The level of chasing in U.S. Marshals, while both elaborate and impressive, is really fairly preposterous. The notion of one man eluding an experienced and mobilized team of marshals that long pushes the bounds of credibility, and the fact that everyone involved survives sequence after sequence of extreme danger is even less believable.

While action-packed and entertaining on the surface, U.S. Marshals fails on a human level. We never really get to know any of the key players or learn what motivates them. Irene Jacob plays Snipes’ love interest, but their relationship fails to evoke emotion. Does Sam Gerald have any sort of personal life? He’s far too macho to let us know. The end result is a long game of cat and mouse, and those, no matter how interesting, are a dime a dozen.