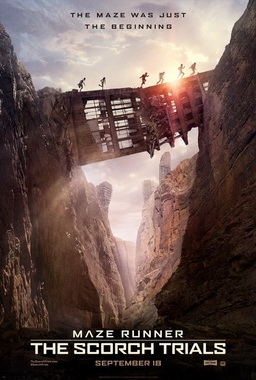 If you watched The Maze Runner, you know it was a movie about teenage boys (and one girl) being trapped in a sort of Lord of the Flies scenario, where they have been living for days… weeks… months… years (?) in a sort of magical glade that seems all well and good, except that they can never leave. To venture through one of the gaps in the ever-sliding stone walls means that you enter a deadly maze where no one has ever come out alive.

That is until Thomas (Dylan O’Brien) and his crew (SPOILER!) make it out of the maze at the end of the first film only to find that the whole thing was a horrible, meddling scheme by a mysterious organization called W.C.K.D. (WICKED). The kids get saved, and at the beginning of The Scorch Trials, all (again) seems good. They are in a compound with other teens that survived the maze, they are given food, water, and beds, and after only being in this compound for a few days, hope that their names will be called so they, too, can be the next lucky one to move on to the a glorious assignment.

You can see that this whole setup, which has more than a little hint of Logan’s Run (and many other sci-fi movies), is most likely fishy, especially when it is smirky Aiden Gillen calling out the names. Fishy, indeed, it is–and the next thing you know, Thomas and Co. have escaped out of the compound to what looks like, honestly, hell on earth. The outside world is a desert of destruction (“The Scorch”) with cool, desolate landscapes of urban decay, blown through by sand dunes. The kids, who have heard of a rebel alliance somewhere in the mountains, need to first survive The Scorch, which includes dodging the persistent troops from WICKED that are determined to capture them.

Now, let me just say, a LOT goes on in this movie, and it kind of goes on and on and on. Compared to The Maze Runner, which, in its singularity of plot was kind of dull (in my mind), The Scorch Trials introduces us to multiple plots and scenarios, most of which are deadly in one way or another. Here is the obstacle! Will our heroes survive? Of course! (At least most of them!) There are zombies, helicopters, valuable dripping fluids, hallucinatory beverages, and at least one “Girl” who gets hauled along, mostly to be as much fun as a wet blanket, standing there gape-mouthed while the boys try to save the world (or at least themselves).

But there is enough going on that I was always interested. As much as I enjoyed action sequence after action sequence, I also strangely enjoyed the series of “Where have YOU been?” actors that show up, one after another, as the kids cross paths with various shades of characters. Giancarlo Esposito? What are you doing here? Lili Taylor? So good to see you! Is that Barry Pepper under a scraggly hippie beard? Where have YOU been the last few years? And, without spoiling it, there is a cameo by one actor that caused all the sci-fi geeks in the audience to squeal a little.

By the time The Scorch Trials concluded, I felt like I had watched several movies in one. After the first Maze Runner movie, I was done. But after watching The Scorch Trials, would I invest time in another sequel? I have to admit, yes, the second film may have changed my mind.

The Ultimate Fan Edition Blu-ray release includes a bevy of extras to claw your way through, including a gaggle of featurettes, totalling about an hour, called Secrets of the Scorch, including behind the scenes footage, plus cast and crew interview chatting about the series thus far. There is also a Visual Effects Reel, highlighting scenes like the bunker escape, the lightning storm scene (which I totally dug in the film) and the creepy mall. There are the usual deleted and extended scenes with optional commentary from director Wes Ball, screenwriter T.S. Nowlin, producer Joe Hartwick Jr., and editor Dan Zimmerman. Finally, to satiate those who can’t get enough, there are storyboard and concept art galleries, a gag reel, and trailers.