Me and Earl and the Dying Girl

Confession: I was unfamiliar with the YA novel by Jesse Andrews on which this Sundance Grand Jury Prize winner is based, and had no real expectations going in. Nonetheless, I was completely charmed by its story and trio of wonderfully flawed characters. 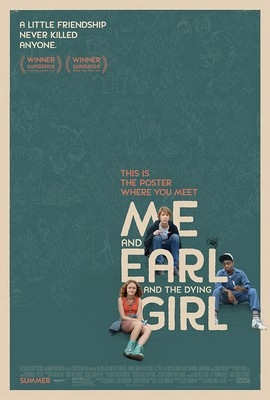 Thomas Mann stars as Greg Gaines, a contemplative and awkward semi-loner, who’s decided the path of least resistance towards getting through high school unscathed is to be on casually good terms with everyone, but to never truly get close to anyone. His best friend since childhood is Earl (Ronald Cyler II), a comparatively laid-back dude who also seems most comfortable on the fringes. Together, they make very bad, super-low-budget reimaginings of classic films (which provide some of Me and Earl’s biggest laughs), and spend their lunch hours watching old movies in their history teacher’s office.

But when Greg’s mom (Connie Britton) asks him, as a favor, to hang out with his just-diagnosed-with-cancer classmate Rachel (Olivia Cooke), the Teflon teen has to (veryvery reluctantly) open up his life, and himself, for the first time. Thankfully, Rachel is just as disinterested in a forced friendship, but the pair begin to find common ground in their mutual outsiderness and respective issues.

Honest, funny and nicely unsappy – while still very effectively tugging at the heartstrings – Me and Earl has a decidedly Perks of Being a Wallflower tone to it. Greg is a bit like Perks’ hero, Charlie, and though the specifics are different, this is another solid, engaging story of an awkward teenaged boy finding his footing with his best guy and gal pals at his side.

Mann makes for a likeable lead, and does a great job of making Greg equal parts aloof and a goof – sure, he keeps folks at arm’s length, but it’s obviously more out of self-preservation and fear than a genuine dislike of other people. Cyler’s Earl is a perfect yin to Greg’s yang, with a simple, direct, cut-and-dry approach to life that balances his pal’s anxiety and overthinking. And, as Rachel, Cooke delivers the sort of idealized version of a teen girl that winds up in stories like this: spirited, unfazed, quirky, real… and, of course, beautiful. What teenaged boy wouldn’t want to cheer her up with popsicles and terrible remakes and the perpetual adoption of a “sub-human state”?

Me and Earl will likely wind up grouped with many other YA film of its ilk, but that’s okay: it’s a welcome and worthy addition to a roster of similarly themed coming-of-age flicks that already includes Perks, Nick and Norah’s Infinite Playlist, The Spectacular Now and The Way Way Back.