Anybody who walks around with a rabbit on a leash has to be a little bit nuts, but this does not diminish her contribution to children’s literature or her work as a conservationist.
By Jenniferon December 21, 2013
0 Comments
Our Rating 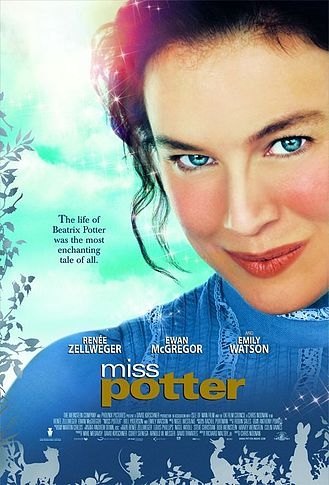 The work of Beatrix Potter is so ubiquitous that you’d be hard-pressed to find someone who doesn’t know about Peter Rabbit, Squirrel Nutkin, or Jemimah Puddleduck, but how many of us have stopped to think about the woman who brought these iconic characters to life? As much as I loved her books, I never really considered that it might have been a big deal for an unmarried woman to be writing children’s books in 1902. Her intelligence and independence were nothing to sneeze at, and Miss Potter gives us a glimpse into this remarkable woman’s world.

When we meet Miss Potter (Renee Zellweger), she is already in her early thirties. As the daughter of a lawyer and a relentless social climber/witless wonder, Beatrix was expected to marry a wealthy young man equal to her station. After refusing a string of unsuitable suitors, her mother cut her off. If she wouldn’t take what she was offered, she would have no one at all, and so Miss Potter retreated to a world of wildlife and imagination. Though her watercolors showcased her considerable artistic ability, her family dismissed her pictures and stories as girlish silliness.

As the movie begins, Potter is just beginning to convince herself that she’s a grown woman who deserves a shot at life. She has sold her artwork to greeting card companies, but has yet to find a market for her children’s stories. A family-owned publishing house takes her on as a sort of pity project for their youngest brother, not realizing that her books will change the face of children’s literature. Norman Warne (Ewan McGregor) is the late-blooming brother assigned to work with Miss Potter, and, like Beatrix, his ability has been underestimated. He tackles the project with absolute care and enthusiasm, and the two soon realize that they are kindred spirits. Even Norman’s sister (Emily Watson) quickly becomes Beatrix’s #1 confidante.

Everything about Beatrix’s publishing venture is positive, so of course, her mother finds fault with the whole endeavor. She maintains that the Warnes are socially inferior, and wrinkles her nose at the whole idea of working. When Beatrix announces her intention to marry Mr. Warne, her mother insists that they delay their wedding while the Potters take their usual summer holiday. The engagement is to be keep a secret, since Beatrix will surely come to her senses by Fall. Sadly, Norman develops a cough in Beatrix’s absence, and abruptly wastes away. Isn’t that right out of a Victorian novel?! If it weren’t true, you’d revel in the fantastic plot twist, but alas, Norman was a real man who really did die.

It seems that this is the final straw for Beatrix. She can no longer bear to live under her parent’s rule, and with her newfound wealth and fame, she can easily afford her own home. She purchases a working farm in the country, as well as several other farms in the surrounding area. She single-handedly helps to preserve the ecology and integrity of the Lake District, leaving 4,000 acres of land to the National Trust at the time of her death.

Miss Potter has been criticized for being an overly sentimental film which casts our heroine in a saintly light. If you want to be cynical, this is a valid argument. Even I caught myself rolling my eyes when Potter’s watercolors came to life on the page and she started talking to them, but her kookiness is not our concern here. Anybody who walks around with a rabbit on a leash has to be a little bit nuts, but this does not diminish her contribution to children’s literature or her work as a conservationist.

Most importantly, the film shows how difficult it was to be an unmarried woman only one hundred years ago. It didn’t just mean living with your parents and lacking a shoulder to sleep on—it meant being excluded from any sort of adult life. (She couldn’t even visit the printer without a chaperone!) For Potter to have succeeded is no small feat, and for that, you’ve got to give her props.