Mystic River is lifted by sheer power of the acting.
By Lindaon December 21, 2013
0 Comments
Our Rating 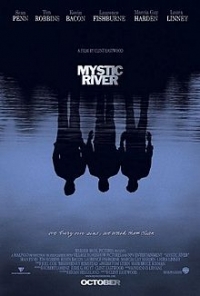 Alrighty, I’ll readily admit that I’ve been sitting on this review for awhile. I saw Mystic River several months ago, and since then have had pounded into me the excessive praise by critics all across America for this Clint Eastwood-directed drama. Now with heaps of Oscar nominations on its resume, I feel that I at least have to get a review up of this film. But the truth is, though I do agree that Mystic River is a good drama with some very fine acting performances, I didn’t then—and don’t now—feel very passionately about the film.

I read one criticism (really, only one!) that Clint Eastwood takes grocery-store novels and makes them into better films than they warrant (take note: Bridges of Madison County). And, you know, I’d have to agree. The thing about Mystic River is that plot-wise it is really not that exceptionally unique from most adult drama/thrillers we see out there. We’ve got boyhood friends that have a life-altering experience as children, then we re-meet them as adults when they are thrown together again despite their lives having taken wildly divergent paths. Conflict ensues, and someone inevitably loses.

Dave, Jimmy and Sean share the traumatizing childhood experience of Dave being kidnapped and sexually abused while the other boys did nothing to stop the abduction. Dave survives, but the trauma and guilt on all sides breaks the trio apart. Now, as adults, they are thrown together when Jimmy (Sean Penn) learns of the murder of his teenage daughter. Sean (Kevin Bacon) is one of the cops assigned to the case, and Dave (Tim Robbins), who is a hopeless washout as an adult, becomes a suspect.

Mystic River is lifted by sheer power of the acting. Nominations have been thrown at this film, and they are well-deserved. Sean Penn as Jimmy is outstanding as the grieving father who is so clenched with pain and rage that he will inflict his own justice if he has to. Tim Robbins is mumbly and flinching as a broken man who never recovered from his childhood trauma. Marcia Gay Harden is heartbreaking as the equally fragile wife of Dave, and, in my book, her last scene of the film is the best in a film filled with great scenes.

But as good as those portrayals are, there are others that just didn’t work for me. Kevin Bacon doesn’t really have anything to do as the cop on the case. Plus there is a ridiculous and quickly tiresome side-plot of his estranged wife constantly calling him and saying nothing. The first time, you say, “Uh, ok…”, but each time his phone rings, you begin to dread this repeated scenario that brings the momentum of the film to a screeching halt. Laura Linney, who in my book is the Queen of Fabulousness, is also underused. In fact, in the role of Jimmy’s wife, she is barely in the film, until the end when she is given an over-the-top show-stopper of a scene that comes from nowhere.

Despite my quibbles, I do recommend Mystic River. Despite it not being among my Top Ten of the year, it is a well-made film. Clint Eastwood has a sure hand as an actor’s director, and Mystic River is a refreshingly adult drama. Despite the plot not being particularly revelatory, the film is indeed praise-worthy in that it rewards the patience of the audience by offering an intelligent film with well-developed characters.