Despite a fair amount of floundering, Rocky II left me with tears running down my face and ready for more.
By Jenniferon December 27, 2014
0 Comments
Our Rating 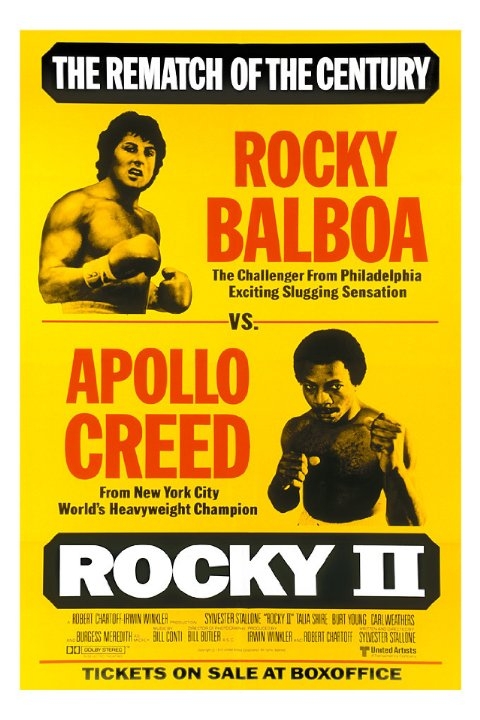 When Rocky says that he’s a dumb guy in the first movie, you’re inclined to go, “Aww, you are not.” He may be uneducated, and he may be a little simple, but he’s intelligent in all the ways that count. He’s a good person who knows how to survive. He’s kind to animals. He’s respectful of women. He is in no way a caveman… Until Rocky II.

The film opens with a replay of the heavyweight championship, a clever technique that puts you right back in the moment, and allows the story to pick up where it left off. Rocky and Apollo are both taken to the hospital to recover, and Rocky is sporting some pretty serious injuries. Though he’s been boxing for years, Apollo is the first fighter to have broken his nose, and the blows to his eye area have damaged his vision. Another fight could cost him his sight entirely. Luckily he’s got all that money from the championship, and there are plenty of endorsement deals to supplement his income. Rocky should be set for life, right? Not so much.

Upon his release from the hospital, Rocky takes Adrian to the zoo, and proposes to her at the tiger exhibit. Rocky! Remember when that guy told you to take Adrian to the zoo because retards like it there? What are you thinking? Even if it is the nicest place in your neighborhood, even if the tigers are symbolic, even if Adrian gives you a resounding yes, you’re wrecking the most romantic moment in the movie by making us laugh!

Of course Adrian does reply with a resounding yes, still barely believing that life is being so good to her. After the wedding, Rocky showers Adrian in expensive gifts and does his best to provide her with nice things. They buy swanky watches, fancy jackets (his has a tiger on the back!), and a Firebird he can barely drive. By the time they purchase the house they really need, much of the prize money has been spent. Rocky tries to cash in on some of those endorsement deals, but his foray into commercials finds him wearing a caveman costume and struggling to read cue cards. “Yo, I’m not punchy,” he insists, “I have what they call a relaxed brain.” Dismissed as a simpleton, Rocky has no choice but to look for a real job.

If you’re not depressed already, this is a good time to reach for the Kleenex. Now expecting a baby, Rocky is even more determined to get an office job and create a real life. Sadly, he never made it past the ninth grade, and every time he goes for a job interview, some paper pusher in a suit pats him on the head and asks if he wouldn’t rather go do some nice manual labor. After a few days at the meat packing plant where Paulie used to work, Rocky is laid off, and here he officially hits rock bottom.

He tries to convince Adrian that the doctor exaggerated the damage to his eye (“I see like a beagle…or somethin’!”), but she’s having none of it. Instead she offers to go back to work at the pet store. Just as I was thinking, “Yo Adrian, stay away from the kitty litter!”, Rocky says, “What if you catch some pet shop disease?” She assures him that she won’t, and since she’s the smart one, he allows her to take charge. I felt that this was a good time for Rocky to begin work on his GED, but a man can only swallow so much pride before he starts to choke.

With Apollo Creed brooding over his loss and chomping at the bit for a rematch, Rocky is drawn back to the only thing he knows. However, he’s well aware that he’s going against Adrian’s wishes, and his effort to get back into shape is only halfhearted. The downhill slide continues when Adrian goes into early labor and falls into a coma. Rocky spends every possible moment at her side, holding her hand, reading aloud in his halting, deliberate way, or just talking to her. When visiting hours end, he retreats to the chapel to pray. He doesn’t even want to see his son until Adrian can see him too. Our hero is a broken man without his one true love, and he becomes more bleary-eyed and ragged with each passing day. His devotion to Adrian is truly touching, and somehow makes up for the movie’s cheesier bits.

When at last Adrian returns to the world of the living, she gives Rocky permission to fight, asking only that he win. With that simple word, Rocky is off and running (literally), and this time he takes the steps of the Philadelphia Museum of Art with a pack of admiring children. After the obligatory but very uplifting training montage, Rocky is back in the ring, ready to take Apollo one more time. Everyone’s wondering which fighter will draw first blood, but by now we all know that Sly NEVER draws first blood. He just finds a way to come out on top. Despite a fair amount of floundering, Rocky II left me with tears running down my face and ready for more.