Cross this stepfather and he’ll wipe out the whole family, assume a new identity, and start all over again. 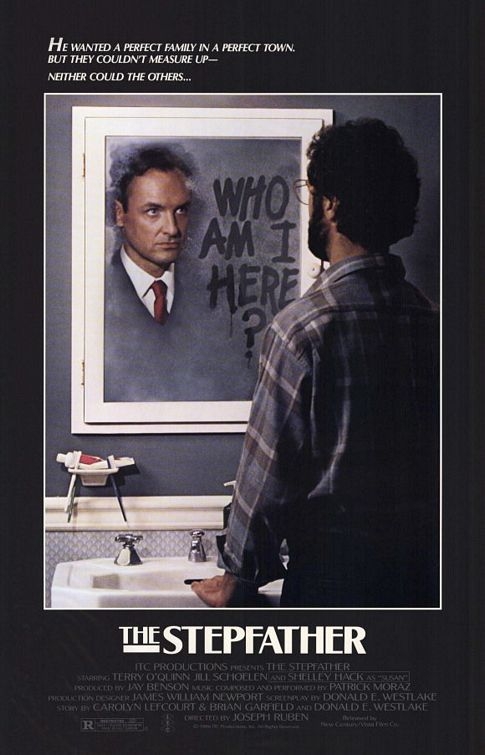 We’ve all had moments when our families have disappointed us so much that we can’t believe they’re ours.  It would be nice to disown them, or run away, or cry and swear and kick something, but for the most part we take a second to collect ourselves and deal with it.  Not Jerry Blake (Terry O’Quinn).  Cross this stepfather and he’ll wipe out the whole family, assume a new identity, and start all over again.

The Stepfather is one of those wonderfully simple movies that makes you squirm with the knowledge that there’s evil lurking under everyone’s noses.  We see Jerry leave a house full of dead bodies as casually as if he were off to a typical day at work, so when he moves onto his new life, we know what his new family is in for.  Stephanie Maine (Jill Schoelen) may have suspicions about her new stepfather, but she’s still so disturbed by the death of her real father (and Jerry’s very existence) that it’s hard for her to tell which of her misgivings are well-founded and which are based in pure, unadulterated contempt.  Besides, she may have been kicked out of school for fighting three or four times herself.  Who is she to judge?

Sure Jerry’s kind of a creepy guy, alternately syrupy sweet and overbearingly strict, but is there really anything wrong with him?  He did buy Stephanie a puppy, and it seems as though he wants a happy Leave It To Beaver life for Stephanie and her mom (Shelley Hack).  But what’s with the full-on fit when Stephanie kisses a boy goodnight?  What’s with Jerry talking to himself and hitting things in the basement?  And most importantly, what’s with the article in the paper about a local guy who killed his whole family and disappeared?

Stephanie makes every effort to discover the truth about Jerry, but the trouble with serial killers is that they’re always so damn crafty.  She expresses her fears to her psychologist, but he dies before he can investigate too thoroughly.  By the time she has decided to let the whole thing go, Jerry has gone around the bend.  He’s done with Stephanie and her mom, and it’s just a matter of time before he moves on.  Luckily, someone else is onto Jerry as well.  It seems his last wife had a brother (Stephen Shellen), and he’s not about to forget what happened.  Can he intervene before it’s too late?

Tension builds as the film nears its climax, and it’s all you can do not to claw your way through the screen and warn the characters about Jerry.  Jill Schoelen is smart, likable, and tough as Stephanie, and Shelley Hack humanizes this misguided mom.  She may have picked the wrong guy, but her intentions are good, and she’s not afraid to admit the obvious when Jerry gets weird.  Most importantly, Terry O’Quinn is flat brilliant as The Stepfather.  There’s a scene near the end of the film where Jerry experiences a moment of confusion and blurts out the wrong name.  He pauses, then says to himself, “Wait, who am I here?”  O’Quinn’s delivery is so chilling that that one line (now featured on the DVD’s cover) practically makes the movie. For an indie thriller from the 80’s, The Stepfather continues to hold its own.

The new featurette “The Stepfather Chronicles” takes us through the making of this cult classic, and gives us a bit of history on the real life case that inspired the movie.  Director Joseph Ruben, producer Jay Benson, author Brian Garfield, and Jill Schoelen all return to reminisce and share their thoughts on the film.  Audio commentary with Joseph Ruben is also available.