Despite the astonishing, scary and true story portrayed in this film, the blur of characters ends up being as generic as the film’s title.
By Lindaon January 27, 2018
0 Comments
Our Rating 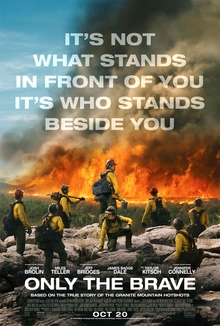 In 2013, all but one of an elite crew of hotshot firefighters died in a horrific and cruel wildfire in Yarnell, Arizona, close to the team’s home base of Granite Mountain near Prescott. I remember hearing about the disaster on the news and crying, it was so awful. Wildfires plague the West (where I live), and it often seems that these types of natural disasters sometimes get the short shrift in the media. As I write this, the ashes of fires in Northern California are still smoldering–fires that raged so fast and ferociously that they killed (so far) 41 people, and decimated thousands of homes and businesses, seemingly overnight.

But back to the film: Only the Brave is a tribute to the Granite Mountain Hotshots. There are a lot of moustaches in this movie: A whole bunch of white guys–20 to be exact–sturdily handsome with many of variations of facial hair, make up the doomed firefighting team. This is a group bromance where barely any of the characters stand out distinctly. That, unfortunately, makes this based-on-real-life disaster movie somewhat muted in impact (though, to be fair, it seems that I was the only one not sniffling in the theater).

They certainly got name actors to fill the handful of major characters that are followed: From Josh Brolin as the head of the fire crew, Eric “Supe” Marsh, to Jennifer Conley as his rancher wife Amanda, to Miles Teller as Brendan “Donut” McDonough, a junkie that tries to get his life together after his ex-girlfriend has their baby. Shoot, toss in Jeff Bridges and even Andie MacDowell, and you have a great cast. The problem is, this one of those “careful” films based on real, recent events. So careful that the characters end up being not particularly engaging.

The plot earnestly goes through the crew’s certification as a hotshot team, then shows them fighting fire after fire, so that you unfortunately find yourself ashamedly thinking, “Um, is this the one? Wait… no. Is it this one?” Interspersed with this is not particularly interesting domestic drama about choices and responsibility.

See? Writing this all down makes me feel bad and dismissive. By any means, this is not meant to dishonor to the real-life people, the true heroes who died. But as a cinematic experience, I’ve been way more affected by watching the news about wildfires than by anything in this film. I don’t know if that is a good thing or bad thing when real life is way worse and upsetting than similar horrors portrayed on screen. But there you have it.