Leave your credulity at the door and you just might have a good time.
By Lindaon January 27, 2018
0 Comments
Our Rating 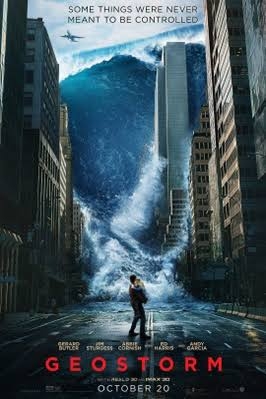 Now I love me a good disaster movie. What I kinda love more than a good disaster movie is a good-BAD disaster movie. Those are the ones with a certain amount of earnestness, as a usually decent actor (usually an appealing, rugged, All-American type) struggles to rise above a script that comes second to the spectacle of massive tidal waves wiping out major coastal cities as he races against time to protect his (usually broken) family. San Andreas and The Day After Tomorrow totally succeeded as awesome, completely unbelievable disaster movies, whereas 2012 was a big pile of poo because they were so intent on having Yellowstone swallow the Continental U.S. that they completely forgot any character development or script.

Geostorm lands somewhere in between. It’s not the best or most fun movie in the genre, but despite what the withering reviews say, it certainly isn’t the worst. I mean, a movie where the Secretary of State pulls a rocket launcher out of the trunk of his car to shoot at his own President so he can rule the world certainly gets some credit in the over-the-top-awesome department.

In the near future, global warming has caused major climate catastrophes killing millions. In response, a coalition of international scientists, led by hotshot American Jake Lawson (Gerard Butler), created a web of satellites that can keep weather disasters at bay, a solution dubbed Dutchboy (like the kid who stuck his finger in a dike to keep the dam from bursting). When Dutchboy starts malfunctioning (oops, sorry Afghanistan!), Jake in space and his estranged brother Max (Jim Sturgess) on the ground in Washington are the only ones who can unravel what may be a conspiracy. But they have to do it fast, as Dutchboy fails (with places like Rio, Hong Kong, and Orlando unwitting victims), it is only a matter of minutes before a full GEOSTORM threatens to destroy most of the populated planet.

Let me say right here that this film was probably doubly enjoyable since I saw it in one of the new-fangled “scratch n’ sniff” 4DX theaters. If you are going to spend basically double the cost of a regular movie ticket to try the 4DX experience, choose a movie like Geostorm. This movie is a perfect fit for the thrill of being shaken, stirred, blown around, and even spritzed with a spray of water while watching a movie. Shoot, during a scene involving a lightning storm, there were strobe flashes of light around the theater. I was half expecting to get beaned in the head by a snowball. Not for the weak of heart or the weak of back, it is a hoot of an experience.

That said, don’t get your expectations too high by the time this movie makes it to the small screen. Strip away the 4DX effects, and you have a middling disaster movie with maybe a bit too much exposition, and not enough actual disaster. But take my word, if you end up watching it at home, you can make it more fun with a fan, some spray bottles, and a pal shaking your chair.

There are a handful of featurettes of the cast and crew, much featuring Dean Devlin, director and producer with many disaster movies under his belt. It is clear that he finds joyful glee in this genre, and explains that the idea for Geostorm came from a climate change question from his daughter. He and the other filmmakers also fully admit that much of the effects in the movie (buildings toppling like dominos, etc.) display a special brand of “not real” physics, but they think it simply looks cool. Impressively, they actually build many full size sets (including interior scenes on the space station) so that the actors didn’t have to fake it being in front of a green screen. Geostorm is silly, but you can tell they all had a good time making it.