There’s only so much drama you can bring to singing competitions, so why not add some explosions? 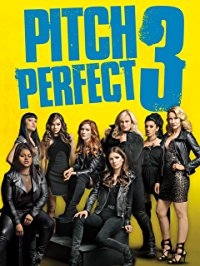 So, if you are a college a cappella group, you can win Nationals, Worlds, then… get a job? That is the reality for the Bellas, who accomplished those feats in the original Pitch Perfect, then No. 2. Now these young ladies, suffer through their 20s with crappy jobs and/or no respect (welcome to the real world!). When the opportunity to go on “one last tour” arises, they can’t resist and soon are on their way to a USO tour in various exotic locales in Europe.

All of our favorites are back, from Beca (Anna Kendrick, who was the breakout star of the series), Fat Amy (Rebel Wilson, who has been the scene stealer of every film), and all the other girls who you’d recognize but not necessarily remember their characters’ names. By plopping them on a USO tour, you get to pepper the surroundings with hot military guys and fill the air with yet another music competition (this one has the Bellas competing with an all-woman bitch-fest rock band and a country band) for the prize of opening for DJ Khaled, playing himself.

Since I guess those stakes are kind of wishy-washy, you may as well throw in a criminal element in the guise of Fat Amy’s long lost shady rich dad (John Lithgow) finding her for the suspicious excuse of a reunion (cue thugs, yachts, and, yes, explosions).

There’s a lot going on here, and not much of it is particularly gripping, amusing, or makes a lot of sense. Add in the fact that John Lithgow sports the absolutely worst Australian accent I’ve ever heard (beyond me talking to a mirror), and you have kind of a hot mess (even if it is vaguely alternate-reality amusing to see Fat Amy wield nun-chucks and kick ass).

But yes, we all love the series for the music (and rightly so). The way to watch Pitch Perfect 3 is to skip all of the nonsense plot and go straight to the musical performances. Shamefully, these are almost an afterthought this time around, which neglects the whole reason Pitch Perfect is so beloved.

Cast and crew shower love on each other in the extras. The gag reel is not particularly funny, there is a highlight about DJ Khaled (for those who miss that he is supposed to be a big deal in the film), and an extra highlights Rebel Wilson and her enthusiasm in getting to wield some mad martial arts skills.