Norway has been making surprisingly good, earnest Hollywood-style disaster flicks, but this one seems to missing a final, satisfying BOOM of destruction. 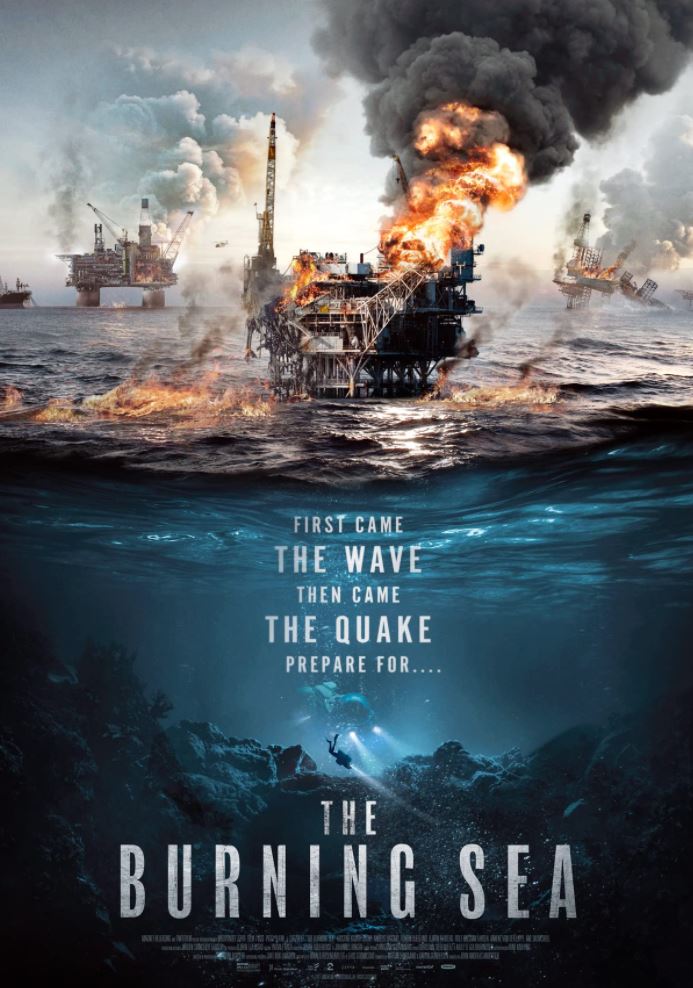 The Burning Sea is a solid disaster flick that seems like it is missing its final act. Not necessarily because of plot and build up, but simply because it is called, well, The Burning Sea. I wanted to see flames and explosions and full-on marine-burning disaster–but the truth is, that part of the promised carnage doesn’t even occur until the very end. At least the film’s original Norwegian title Nordsjøen (The North Sea) allows for some mystery and surprise. But I’m getting ahead of myself.

In sort of a faux-documentary intro, we learn that hundreds of oil drilling platforms line the coast of Norway, and the film posits that while this bounty has been reaping fortunes for the country for decades, one must ask: at what cost? Well, Nature is just about to say enough is enough.

When a big oil company calls in a submarine robotics team for emergency help, it is clear that something mysterious has gone wrong. Submarine engineer Sofia (Kristine Kujath Thorp) and her colleague/sidekick Arthur (Rolf Kristian Larsen) are shocked to find out that they are asked to send one of their underwater robot drones into the wreck of an oil rig that has suddenly collapsed, sinking in seconds, crew and all. But these massive structures don’t just suddenly have one of their legs buckle beneath them–turns out that a massive fissure has opened up under the sea, spewing an unprecedented amount of oil, and is threatening to crack further at any moment.

As the rigs have their crews evacuated, of course it turns out that Sofia’s own boyfriend Stian (Henrik Bjelland) is on a rig that is right in the line of the crumbling fissure. And of course it is good-guy Stian that volunteers to go down in the depths of the structure to manually close a well while the rest of his co-workers are in line for helicopter evacuation. And of course things start a-shakin’ and a-crackin’ while Stian is down there… leaving the rest of them to fly off to safety while falling chunks of metal and a torrent of water fall down the shaft onto poor Stian. Sofia is the only one who believes that he may still be alive, and with her tools and moxie and sidekick Poor Arthur (it’s not a spoiler to know that he is doomed as soon as you meet him), dammit if she isn’t going to bring Stian home alive.

This is the filmmaking team that brought us the previous disaster films The Wave (Bølgen) and The Quake (Skjelvet). Frankly, I love the idea of tsunamis barreling through the fjords, and Oslo crumbling from temblors. Having a country like Norway take a stab at Hollywood-style disaster movies is fresh and fun, and they bring a surprising seriousness to the whole affair, making them less silly and more harrowing.

So I have to admit I was a little disappointed in The Burning Sea. The effects are, well, effective (like the moment where a freighter gets sucked down into a “crack” in the sea like it is the San Andreas of water), and the acting is very earnest. But I couldn’t help but feel like the movie was missing a final act (and yes, the promising title is partially to blame). And I don’t think it was just me. In a clunky attempt to “wrap things up” in a way that the story itself didn’t manage, the filmmakers tack on an after-the-fact faux-documentary “so this is what happened” epilogue. It’s a bit of a deflated balloon after all the action, leaving you with a “Whelp, I guess that’s it!” when all is said and done.