You don’t want anything bad to happen to someone who looks so amazingly hot in tight jeans and a red shirt even with sweat running down his forearms.
By Jenniferon October 27, 2016
0 Comments
Our Rating 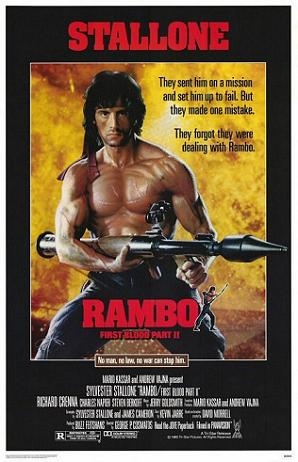 After revisiting First Blood I was chomping at the bit to get my hands on the sequel. You can imagine my horror when I got it home and the tape wouldn’t play. I practically dropped to my knees and shook my fist at the sky, but I took a deep breath, ordered a new copy, and after much ado settled in for the next installment in this very compelling saga.

Following his “quiet war” with the sheriff, John Rambo is sent to a desolate prison camp. He spends his days pounding rocks into dust until good old Trautman shows up. He tells Rambo how hard he tried to keep him out of this horrible place, and offers him a chance to win his freedom and a presidential pardon. All Rambo has to do is take some pictures of the POW camps in Vietnam, and he’s all set. Cinchy, right? Though he reluctantly agrees, the mission goes badly from the get-go.

For starters, one of the first people Rambo meets is Ericson, played by Martin Kove a.k.a. the evil Sensei from The Karate Kid. Right there, you know he’s in trouble, and it’s maddening because you don’t want anything bad to happen to someone who looks so amazingly hot in tight jeans and a red shirt even with sweat running down his forearms. Sure enough, when Rambo jumps from the plane to the target zone, his straps get caught, and he’s left flapping in the wind. Ericson shows surprising concern that Rambo will be torn apart (so much for the No Mercy policy), but Rambo breaks out his trusty knife and cuts himself free.

When he finally meets up with his contact—a Vietnamese freedom fighter named Co Bao (Julia Nickson)—she asks, “Why you so late?”

“I got hung up,” Rambo replies.

Did you hear that?! Hung up, like literally! Rambo made a joke!!

Co Bao’s English as a Second Language is pretty much on par with Rambo’s English as a First Language, so you can see that they’re a match made in heaven. They successfully find the prisoners of war, but when it’s time for Trautman and the boys to bring Rambo in, they ditch him at the last second. Poor Rambo is strung up in the leech pit, then the Russians torture him and try to get him to talk. Good luck with that. Even on a good day Rambo offers up fewer words than your standard-issue cave man, but he looks mighty fine strapped to that weird electrocution contraption with his shirt off.

With a little help from Co Bao, Rambo makes a swift escape, and at last we have a moment of peace. Co Bao inspects his wounds, asks him to take her back to America with him, and they share a kiss. FINALLY someone shows Rambo a little tenderness, and lets him know he’s not expendable. You’d think I’d be jealous, but since my efforts to help John Rambo through the TV have always proved futile, I’m just relieved that someone finally stepped in to do what I could not. Sadly, I fear Rambo was a bit dazzled by the kiss, because he starts to walk away without his bow and arrow, and his enemy radar (which has worked like a sixth sense until now) temporarily fails him. Yes, Co Bao is pumped full of bullets and left to die in his arms. Why? Because NOTHING EVER GOES RIGHT FOR RAMBO… And now the gloves are off.

Rambo turns into a full-on killing machine—hiding in pools of water, camouflaging himself as a wall of mud, and causing explosions right and left. Remember how good that gas station looked when he blew it up in First Blood? Well Rambo must remember too, because now he’s pretty much blowing up everything. It all becomes a blur after awhile, but in the end, Rambo commandeers a helicopter (look at that, he can fly!) and makes it back with the American prisoners in tow. Hah! When he arrives, he knees Ericson in the crotch, then smacks him in the face with his rifle! Yeah baby! Stick it to him! And give him one for Daniel LaRusso!

Rambo pretty much sticks it to everybody by the end of the movie, particularly the evil Marshall Murdock (Charles Napier), but he’s still sad and alone, and I’m worried about him, so now I’m waiting on Rambo III. I remember it being awful. I bet it has even less dialogue and a thinner plot, but I can’t freaking wait.