Oh Trautman, you idiot! How can you be Rambo’s best friend, and still miss the whole point?
By Jenniferon October 27, 2016
0 Comments
Our Rating 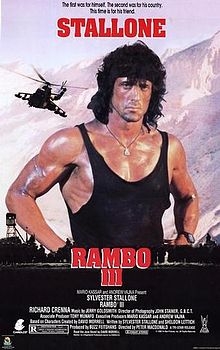 I don’t recall ever having standards, but at some point in my young life, I must have decided that 96% action and 4% dialogue was a bad ratio for a movie. I remember feeling that Rambo didn’t hold a candle to First Blood, and must have boycotted Rambo III entirely, because when I turned it on, it was all new to me. Apparently I wasn’t alone in passing this one over. The film found Rambo fighting the Russians in Afghanistan just as the Cold War was coming to a peaceful end, and in 1989 no one wanted to pour salt in old wounds. Seventeen years later Rambo III is surprisingly timely, and the extra features on the 2002 Special Edition even lend insight into the history of Afghanistan. Who would have thought?

As the film opens, Trautman and his pumpkinheaded cohort, Griggs (Kurtwood Smith), catch up with Rambo in Thailand. Our hero spends his time stick-fighting and working on a monastery, and he’s not too excited when his old friend offers up a new assignment. Trautman explains that it’s time for Rambo to come full circle, and this last mission in Soviet-occupied Afghanistan is undoubtedly the ticket. In other words, Trautman has bitten off more than he can chew (again), and Rambo’s the only one who can help. You can bet these boys never expected Rambo to say no, but he’s slightly less pathetic these days—not so downtrodden, and more in charge. He thanks them very much, and politely explains that he’s already done his time. Hah! That’s what he thinks.

Predictably, Trautman is captured in Afghanistan, and though it must be weeks later, Griggs waltzes up to Rambo one afternoon and says, “something went wrong,” as though they were still in the middle of their first conversation. Realizing that he must go in to save his friend, Rambo packs his detonators and heads to Afghanistan. Upon arrival, he is embraced by Freedom Fighters so tenacious that they regard him as a tourist. He immediately wins their respect, and finally has a posse to back him up. They even include him in a traditional game which involves about 20 men on horses moving a dead sheep from one circle to another. Sadly, this hotness on horseback is interrupted by Trautman’s captor, the evil Colonel Zaysen. For some reason he’s bent on flying a helicopter into Rambo’s head, and it’s time to get back to the boring business of rescuing Trautman.

Unlike the time Rambo was captured and tortured, there’s nothing very compelling about Trautman’s situation. He keeps warning Zaysen that Rambo’s on his way, and when Zaysen scoffs, “Who do you think this man is, God?” Trautman replies, “No. God would have mercy. He won’t.” Oh Trautman, you idiot! How can you be Rambo’s best friend, and still miss the whole point? The reason we love Rambo is that he is just and merciful. Do we need to go back and demonstrate “mercy” vs. “no mercy” for you? No mercy is kicking Daniel LaRusso’s bad leg—not taking out an evil warlord who has it coming. Sheesh.

When Rambo finally comes to his aid, Trautman is still less than helpful: “Oh! Let me hide in that cave while you cover me!” Trautman, you suck. Luckily Rambo’s mastery of firepower has only gotten better since the last time we saw him, and he remains undaunted. You’ve got to give props to the pyrotechnics team on this movie, who come up with some pretty fantastic effects. At one point Rambo actually cleans a wound with fire—like you seriously see the flame lick through his torso and shoot out his back. Hoo-ah! Rambo’s forever blowing things up that are about two feet away, and there’s never any consequence to him. In fact, he usually emerges with his hair all fluffy and right in place. Using these amazing skills, he faces down half the Russian army, and successfully leads his friend to safety.

By the end of the film, Rambo seems more in control than ever before, as though he’s finally ready to let go of the past and move forward. He’s making jokes, and even the soundtrack adds a bit of levity with Bill Medley’s version of “He Ain’t Heavy, He’s My Brother.” It does seem as though this mission has brought Rambo—and his trilogy of films – full circle.

I no longer feel I have to worry about Rambo all the time, but with a fourth movie in pre-production, I can’t help wondering what he’s up to now. For my part, I’d like to see some domestic resolution. Does Rambo ever find love? Does he ever get to lead a quiet life and have a family? I obsessed about it so much that I actually dreamed he moved to the ‘burbs, but couldn’t get used to living in a house. His wife was the breadwinner, but Rambo had reverted to jungle life in the overgrown backyard. I know it was only a dream, but if Sly needs any help with the screenplay, I’m totally available.