Here we get a glimpse of Rambo’s impressively muscled but badly scarred chest, which is confusing, because part of your brain goes “RAWR!” and the other part goes, “Awww.”
By Jenniferon October 27, 2016
0 Comments
Our Rating 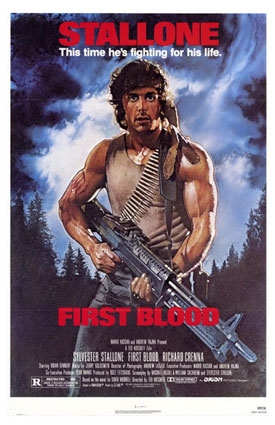 First Blood has to be one of the most distressing movies ever made. Things go badly for John Rambo (Sylvester Stallone) from the very first scene, and it only gets worse from there. After learning that his last living war buddy has succumbed to cancer, Rambo walks to the nearest town for something to eat. He gets no further than the city limits when Sheriff Will Teasle (Brian Dennehy) pulls up and offers him a ride out of town. Wait, what? What did he do? Nothing. Teasle doesn’t like Rambo’s looks—his long hair and army jacket—and he doesn’t want him hanging around his fine community. He drives Rambo to the edge of town, but Rambo’s having none of it. He simply steps out of the car and starts walking back the way he came—and so begins The War.

At this point Rambo is arrested for… surliness? Vagrancy? No good reason? I’d be curious to see what Sheriff Teasle wrote on his arrest report. Back at the station the deputies (including a young David Caruso) give Rambo a hard time, and decide to clean him up with a fire hose. Here we get a glimpse of his impressively muscled but badly scarred chest, which is confusing, because part of your brain goes “RAWR!” and the other part goes, “Awww.” Rambo peers at his tormentors with his droopy, haunted eyes, wondering why the hell the world is so evil, and flashing back to the weird forms of torture he endured as a soldier. And then he snaps. He overpowers the entire sheriff’s department, grabs his hunting knife and heads out the door. Go Rambo!

The war between Sheriff Teasle and Rambo then moves to the wilderness, and Rambo quickly shifts into Mountain Man Mode. He constructs booby traps and spears out of sharpened sticks, easily outsmarting the sheriff’s department at every turn. Even when Colonel Samuel Trautman (Richard Crenna) explains that Rambo is an ex-Green Beret specializing in guerrilla warfare (also clearly suffering post-traumatic stress syndrome), Teasle refuses to give up. He’s got a point to prove, face to save, and he’s not backing down. As much as I enjoy Brian Dennehy, I kind of wished Rambo would take him out. But then Rambo would be no better than the others, and we know he’s a just and merciful man.

The action continues as Rambo spears a wild pig (who knew those lived in the Pacific Northwest?!) and roasts it for dinner, escapes certain death by crawling through a rat-infested mine shaft, and finally heads back to the city in a hijacked army truck. He functions like an animal in the woods, so it’s surprising when he knows how to do human things like speak or drive a truck. It’s kind of hot, really.

I first saw First Blood when I was eight years old, and I thought it was easily the most compelling movie ever made. I wanted to marry Sylvester Stallone, and I wanted to rescue Rambo from his cruel fate. Even I could see that he’s a broken soul—what’s wrong with Sheriff Teasle? I wanted to pound him with my wimpy little fists and tell him to leave Rambo alone. I’m not sure what I could have done for Rambo as a second grader, but I imagine he would take comfort in a world full of little girl’s tea parties, fluffy pillows, and kittens.

Twenty-two years later, I still love John Rambo, and I still want to get my hands on Sheriff Teasle. The movie is so frustrating that you can’t help getting sucked in, but the story sort of unravels when he gets back to town. He blows up a gas station, which seems a little random, even though the explosion is pretty fantastic. Then he winds up crying on the Colonel’s shoulder, explaining what it’s like to be rejected by a society that has no respect for the horrors he’s experienced. This should be a deeply moving scene, but the story Rambo tells is so absurdly gruesome that you almost want to laugh. The Colonel, who finally gives Rambo a consoling hug, is so wooden that you just want to puke. And then it ends. Oh. Okay, then. Time to watch Rambo: First Blood Part II!