Here we have yet another 80s re-boot that misses the mark, but still manages to be a lightning-fast paced action flick. 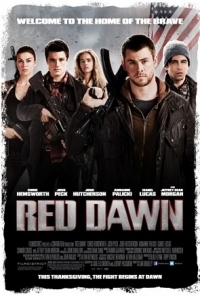 In the updated version of Red Dawn, it is the North Koreans invading instead of a Soviet-led contingent, and once again, the story revolves around a group of kids engaging in guerilla warfare to defend their country (or at least Spokane, Washington).

The group is led by Jed Eckert (Chris Hemsworth), a Gulf War Marine who is home on leave when the North Koreans invade. He gathers together a bunch of teens including his brother Matt (Josh Peck), a big headed, football quarterback who is at the lustful mercy of his cheerleader girlfriend Erica (Isabel Lucas), their childhood friend Toni (Adrianne Palicki), the mayor’s son Daryl (Connor Cruise), and his buddy Robert (Josh Hutcherson). The rest of the group are a hodgepodge of remaining characters from the original story.

The North Korean forces are led by Captain Lo (Will Yun Lee), and, while serving as eye candy, he seems to be constantly blindsided by the Wolverines and berated by his superiors. Ultimately he proves to be a strong adversary for the group.

Despite Hemsworth’s charisma, he’s not able to rescue the rest of the cast, which is weighed down by blandness and wooden acting. Peck seems to mope his way through the film, while Hutcherson takes on the C. Thomas Howell role (or at least a neutered version of it). There’s a sense that his character is maybe not cut out for this and he’ll need to grow up, but his subplot barely registers. The original character development of this kid is lost completely, although he seems to step up to the plate when needed.

Hemsworth and Palicki have the obligatory budding romance that’s given all of two scenes to present itself, while the rest of the characters just provide background noise and add to the obligatory body count.

Overall, Dan Bradley’s Red Dawn update takes its own path to tell the story. It reboots some themes, adds some ethnicity to the cast (which was quickly wiped out), accelerates the timeline (which to a certain point was a blessing), changes character arcs, and ultimately ends differently. All of this doesn’t make the remake a bad film, but it does make it a 2-year-delayed quick money-maker for the studio.