Rocky Heavyweight Collection on Blu-ray gathers all the films in one place along with every bonus feature under the sun. It’s ultra modern. The cover art is eerily futuristic. It’s AWESOME. 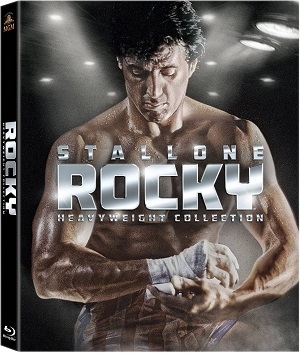 After four decades of watching and collecting Rocky movies, it seems crazy that the entire six film series will fit in one slender case, right in your hand. Where are the four DVDs and one VHS copy that make up your hodgepodge collection? And what’s that? Rocky V? You can finally own this embarrassing installment without the humiliation of making a separate, deliberate purchase. Rocky Heavyweight Collection on Blu-ray gathers all the films in one place along with every bonus feature under the sun. It’s ultra modern. The cover art is eerily futuristic. It’s AWESOME.

The greatest thing about the Rocky story is that it covers a complete character arc. We meet Rocky as a ne’er do well from the wrong side of the tracks who dreams of making it as a fighter. He succeeds through sheer determination and dogged training, and finds his soul mate, Adrian (Talia Shire), in the process. It’s no wonder audiences and critics fell in love with this inspiring underdog story in 1976. The original Rocky is a genuine classic with as much gravitas as any other Oscar winning film.

Rocky II hits some shaky ground in tone and in direction as Rocky struggles with injuries from boxing, financial woes, and the question of what to do when your fifteen minutes of fame pass. He and Adrian are married with a baby on the way, but they’ve adopted a lifestyle his past winnings can’t support. His endorsement deals turn bust when it’s discovered that Rocky can barely read. Basically the movie is impossibly sad and a little slow until Rocky breaks into a training montage (complete with uplifting music) and prepares for another round in the ring with Apollo Creed (Carl Weathers). Rocky triumphs as Adrian lies in a hospital bed mending from complications in her pregnancy. The movie is a bit off-key, not unlike this moment in Rocky’s life, but the genuine sweetness between him and Adrian remains, and his champion spirit wins again.

Rocky III finds the Balboas on the rebound, again enjoying the fruit of Rocky’s success. But wait! At the unveiling of a statue in Rocky’s honor, Clubber Lang (Mr. T) heckles Rocky and gets up in Adrian’s grill. There’s no choice but to show him who’s boss in the boxing ring to the tune of Survivor’s “Eye of the Tiger”. Hulk Hogan also appears in this frivolous ode to 1982.

But why bother with III when IV offers up a quick recap of all that was great in that movie and then quickly turns into a true 80s tour de force of excess and awesomeness. If you were a child of the 80s, Rocky IV may actually be the only movie you need. Here Rocky must fight against the evil Russian Ivan Drago (Dolph Lundgren at his finest) to uphold Apollo’s good name, to prove America’s inherent goodness, and to give James Brown the perfect venue to give a rousing performance of “Living in America”. (Cold War, anyone?) The movie also features Brigitte Nielsen at her icy, Amazonian best, and finds the Balboa family living high in a world of sports cars, swimming pools, and robots. For once, their lifestyle doesn’t seem put on and Rocky seems to have learned to navigate his new found wealth and status. But wait, there’s more….

And I’m sure we all wish there weren’t. Rocky V is an abysmal movie that blatantly capitalizes on the franchise without offering anything of value. Like, the Balboas let Paulie (Burt Young), Adrian’s perpetually mopey semi-failure of a brother, handle their finances and, golly, he loses all their money. And to save the family from a life of total penury, Rocky agrees to fight this fat lump of a street kid, much to the chagrin of his son (played by Sage Stallone). It’s flimsy. It’s ridiculous. It does boast a really good Elton John song.

After the misfire that is Rocky V, it’s easy to approach Rocky Balboa with lowered expectations. Instead we return to the tone of the first film, a hopeful but realistic story about a man who is determined to defy the odds and prove that he’s something special. Having lost his beloved Adrian to cancer, Rocky finds himself adrift in life. He owns a successful restaurant, but has a strained relationship with his son, a brainy Wall Street protege (Milo Ventimiglia) who benefited from the wealth and education Rocky provided but did not have. Rocky wants to connect, but he’s a sweet, simple soul who is awkward in the face of his son’s sophistication. Rocky’s faithful sidekick remains Paulie (a sad, but apt choice) and he finds a shot at redemption doing the thing he knows best: boxing.

The tone and quality of the Rocky films varies somewhat wildly, as does the extent and affect of his brain injuries, but we are left with a character who represents hope, perseverance, and goodness. Additionally, he looks mighty fine all the way up to Rocky Balboa, at which point the composition of Rocky’s hair becomes a question. Is it a toupee? A carpet sample? Real but over-processed hair? We may never know, but Rocky will endure. Not every plot point in the series is believable, but the ups and downs faced by a man trying to do his best are relatable whether they unfold in a boxing ring or within the confines of family life. For all the pomp and ceremony, Stallone does a remarkable job at capturing the humanity in Rocky.

This six disc set is rife with over three hours of extra features, including 8MM home movies of Rocky, a substantial making-of documentary, featurettes on music, make-up, hair, directing, and camera work, video commentary by Sylvester Stallone, boxing featurettes, an interview with sports historian Bert Sugar, theatrical trailers, TV spots, and (wait for it!) Sylvester Stallone’s 1976 appearance on Dinah!. If you ever wanted to delve into the world of Rocky, the Heavyweight Collection gives you the perfect excuse to disappear for hours on end.