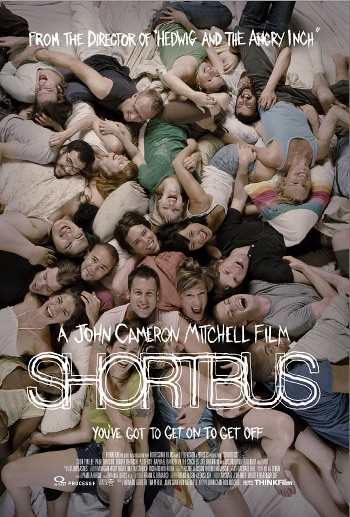 What may shock you is that Shortbus is a warm and funny and sad movie. If you have seen John Cameron Mitchell’s Hedwig and the Angry Inch, this, however, should not surprise you.

Shortbus is the name of a sort of cabaret-salon-sex club in the heart of New York City. The era is post-9/11; the rubble of the attack is gone, leaving a gaping wound in the ground waiting to be healed. The characters reflect this sort of jaded seen-it-all attitude, except that they all have their own wounds to heal. James (Paul Dawson) and his boyfriend Jamie (PJ DeBoy) think of adding a third to spice up their 5-year relationship. Sex therapist Sofia (Sook-Yin Lee) counsels people like James and Jamie, but finds that in her own active (and creative!) sex life with her husband Paul, that she has never had an orgasm. Dominatrix Severin (Lindsay Beamish) is experiencing, well, some dissatisfaction with her job duties. They all end up at Shortbus seemingly to explore variety in their sex lives, but are actually on more of a quest to heal something that is broken in themselves.

But before you think that is all heavy, dour, and depressing, the surprising thing about Shortbus is that it is often very very funny. Let’s just say that you’ll never hear the national anthem the same way again after seeing it sung by an enthusiastic ménage a trois. Our main characters are wounded yet funny, and Justin Bond (playing himself as a sort of Joel-Greyish MC of the club) is particularly scene-stealing with his observant quips. But it is Sofia who turns out to be the heart of the film as she is actually the dorky and shy person that most of us would be in a place like Shortbus. She is earnest, yet open, and awfully cute.

Shortbus the film will make you guffaw, maybe squirm a little, and even perhaps get you a little choked up. Culminating in the great blackout of 2003 (as an arty model of the city goes poof! block by block into darkness), the film literally comes to light at the end as each of the characters are able to come to grips with their problems. And if that means achieving an orgasm, so be it.

The DVD extras on Shortbus are great—unsurprising to anyone who checked out all the goodies on the DVD for John Cameron Mitchell’s Hedwig and the Angry Inch. A fascinating mini-documentary called Gifted and Challenged: The Making of Shortbus gives a behind the scenes of how difficult it is to cast, create, and get funding for well, a film with real sex in it. The crew faced obstacles like actors dropping out at the last minute, funding disappearing, and even the great NYC blackout of 2003, which ended up playing a role in the film. And heck, it’s fascinating that star Sook-Yin Lee is (was?) a well-known broadcasting personality for Canada’s CBC network, who (unsurprisingly) got a little nervous when they heard about her film project. But hooray for Canada! Support for freedom of speech won out, and she kept her day job (I’ll betcha she would have been dismissed in a second by a US broadcaster).

The extras also include interesting deleted scenes (including a series of character-developing moments involving the Peeping Tom character that just didn’t work), feature commentary by director Mitchell and cast members, mainstream and internet-only trailers, and an amusing, if slight, mini-doc called How to Shoot Sex: A Docu-Primer. And if you are one of the regular folks who jumped at the online opportunity to get your name in the DVD credits, well, you’ll find that here, too.

If you are still nervous about seeing Shortbus after reading all of this review, I’ll tell you something: As I was watching the extras on the DVD, my nervous friend wandered in the room and watched the screen out of the corner of her eye. Having not seen the movie before, the extras actually helped her become less leery of the whole concept of real sex in a feature film, after seeing how earnest and friendly the cast and crew were. She ended up watching the whole film of Shortbus later, and was pleased (and surprised) to report that she really enjoyed it.