John Sayles is one of the few working directors that is not afraid to make political films. And I’m mean films about real people, not President Harrison Ford kicking the collective ass of threat-of-the-moment bad guys. By the end of some of Sayles’ films (think of the labor strikers in Matewan, or the Central American political unrest in Men With Guns) you leave the theater feeling it is your civic duty to pay attention to the news, to your neighbors, and to the people who have power. And how can that not be a good thing in these apathetic times?
By Lindaon September 29, 2013
0 Comments
Our Rating 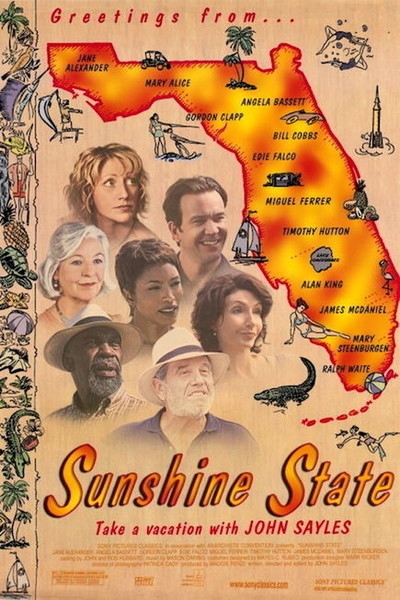 However, civic-minded issues don’t always make for compelling drama. Case in point: In Sunshine State, the thread that brings all the characters together in a small Florida tourist beach town is the fact that developers plan to come in, tear down much of the run-down community, and create a high-class resort. This IS interesting to a point, but whenever the characters trumpet their particular views on this situation (coming from all sides to make a somewhat balanced debate), it starts to feel a bit like the boring lectures we all had to sit through in high school American Government class. This is when Sunshine State drags in its over-two-hour length.

But thankfully, Sayles remembers to humanize his political presentation. There are more vivid characters in this film than you can count on two hands. Luckily, Sayles concentrates mostly on two women: Desiree Perry (Angela Bassett), a woman who fled her community 25 years ago because of some dark secret, and has returned reluctantly for a visit, despite creating a successful life for herself; and Marly Temple (Edie Falco), who runs a seen-better-days tourist motel, work that she inherited from her father, and wistfully pines for her dreams that she gave up long ago.

Angela Bassett is a fabulous actress, completely owning the screen with her intelligence and her confident and strong physical presence. Simply put, she kicks ass. But she also has shimmering depth and range. When her character confronts a man from her past in a shopping mall, you can’t help but wince as she tries to cover her humiliation at the encounter. You see a big-city woman who is still struggling with her small-town past, despite the distance she built, both in years and in miles, from the girl she used to be.

But it is Edie Falco who steals every scene she is in. Marly is kind of a wishy-washy woman. She’s a bit scrappy, a bit no nonsense, and doesn’t really have energy to take any shit from anyone anymore. But she also has a hound-dog sadness to her. She is having a half-hearted affair with a young hot golfer, and she seems to have given up on her own dreams a long time ago. But in one of the more odd-duck affairs to hit the screen, she takes up with one of the developers (Timothy Hutton) who is threatening to tear down the motel that is her livelihood. Surprisingly, it is this man who reminds her of what she used to be, and who she wanted to become.

To see Edie Falco’s character blossom through the film is truly a delight to watch, and alone is a good enough reason to check out Sunshine State. But as an extra bonus, the movie is good for you, too. You very well may be inspired to check out your next town meeting and get to know your neighbors after this one.