One of the centerpieces of the festival was the Evening with Francis Ford Coppola, which I hemmed and hawed about, then finally bought a ticket a day or two before the event. Depending on how chatty the subject is, and more importantly, if the subject has anything interesting to say (no matter how famous or established they are), these kind of events can truly be hit or miss. So I admit that I was delightfully surprised at what a cool guy Mr. Coppola was, and how truly positive and inspiring he was.

The Egyptian was packed for the evening, and I even saw local celeb—Mr. Eyepatch himself—glass artist Dale Chihuly hobble into the theater with an impressive self-important entourage. Coppola and his wife were homey enough to be sitting right there in the audience for the screening of his latest independently-funded film Tetro (4/8), which comes across as a deeply personal work for Coppola.

Shot in gorgeous HD digital black-and-white, the story is of two brothers: young Bennie (newcomer Alden Ehrenreich) shows up in Buenos Aires on leave from his cruise ship. He’s excited to see his estranged older beloved brother (Vincent Gallo) who left the family years and years ago, who promised to come back for Bennie (he never did). His brother now calls himself “Tetro”, abandoning his former life as the stifled son of a very famous conductor (Klaus Maria Brandauer). When family tragedy struck, Tetro fled to start his own life, and now that Bennie has found him, he’s not particularly happy. Tetro’s woman Miranda (Maribel Verdú) tries to get the two to become close, but there is so much baggage with their family, that unspoken secrets fill the room, along with broken dreams (Tetro is a failed writer), that it seems almost impossible for the two to move on. 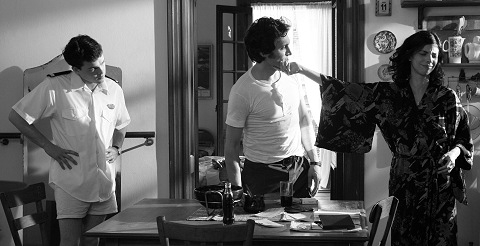 The film builds (slowly I might add, at over two hours long) to a big revelation about that family that is right out of a Greek tragedy, but by then it was already too late for me. A big part of my problem is that I’m not impressed with Vincent Gallo as an actor. His charisma is null, and his boofy hair is distracting. Spanish actress Maribel Verdú acts circles around him, and brings true heart into the story. The rest of the film, despite looking great, grew tedious and rambling, and I had the shocking revelation figured out long before the big scene (punctuated with a crescendo of dramatic music).

But the audience gave the film wild applause, and even wilder for Coppola as he took the stage (along with Ehrenreich) for a Q&A. Moderator Carl Spence luckily reigned in the questions, warning the audience to stick to Tetro-related questions (otherwise we could have easily been there all night). Coppola was warm and friendly and super-chatty… and most importantly, I could hear everything that he was saying from way up in the balcony (sound at some of these Q&A’s can be super-crappy). What I loved about Coppola was that he is from the school of positive thinking, and inspired everyone to pursue their dreams, regardless of the chances of big success. It is hard to put into words what he conveyed, but I think everyone in the theater left with a smile and a spring in their step, ready to tackle the highest mountain, cook up a delicious meal for their friends, or create a masterpiece painting…. just to do it.

PreviousSIFF 2009: Home is where you make itNextSIFF 2009: And the winners are…