My first day of SIFF usually falls on the second day, as I eschew the mobs of folks fighting over tiny cupcakes and the like that is offered at the Opening Night soiree. And usually, as was the case this year, I also get to see the Opening film in advance. And there was nothing about The Extra Man (4/8) that warranted an extra viewing. 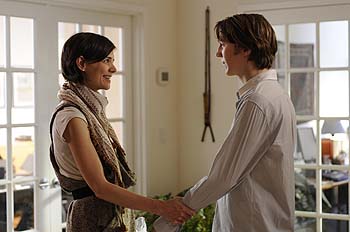 Despite the pedigree of interesting directors (Shari Springer Berman and Robert Pulcini of American Splendor) and an intriguing cast (Paul Dano, Kevin Kline, John C. Reilly, and Katie Holmes), the film kind of rambles and doesn’t seem to have much of a focus. Dano plays Louis, a young man in modern times who has an affection for the simpler, more gentlemanly time of Fitzgerald’s 1920s. He finds a room in a flat with another “gentleman” in the form of Kevin Kline’s Henry, who spouts the crazy, dances around in his living room, and explains his proud role as a “walker” or “extra man” for society ladies that need escorts. This is all romantic sounding, but rather depressing in real life (at least to the audience). Reilly shows up as a woolly eccentric who speaks in a shrill falsetto (ugh), and Katie Holmes is surprisingly the most real person around as Louis’ co-worker in a normal Manhattan office. I laughed a bit, often questioned the direction of the plot, and left the movie with a shrug.

Luckily, I picked well (and rather spontaneously) for my first choices of the fest, choosing to focus on the Neptune Theater. Because I was unorganized, I bought my tickets at the booth. Seems easy, right? But for some reason there was a clog of confusion as some kids in the front of the line wanted the student price, but the computers were not set up for it. So they stood there. They didn’t move to the side until the glitch was figured out. They just stood there. Finally someone pointed out that others could buy their tix in the meantime. Oh, OK. But when I made it to the front (as my half hour cushion quickly dwindled), I asked for the member discount. Uh… more confusion. So *I* had to step to the side. Finally after another five minutes, it was communicated that there were no day-of discounts. Fine, fine… I happily paid the full price. But then you know what? After successfully watching my first flick, going to pizza, then coming back for my second, I freakin’ LOST my second ticket. I literally was right at the front of the moving line patting all my pockets, grasping for the ticket that was there just MINUTES before, I swear! Nowhere to be found. So I paid for my second movie twice (with the sympathies from the ticket seller who remembered me from earlier). Oh well. At least BOTH my movies were great! 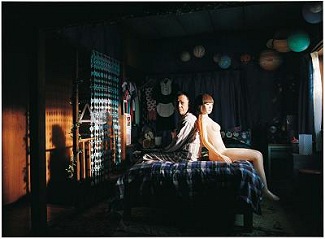 First up was the latest by my absolute favorite Japanese director, Hirokazu Kore-eda. His style is so gentle, so moving, and often so melancholy, that I was surprised that his latest was touted as a “comedy” about a blow-up sex doll. But did it surprise me that Air Doll (Kûki ningyô) (6/8) was gentle, funny, moving, and melancholy? No, not at all. The film starts out with a man coming home from work to his doll Nozomi, conversing at the kitchen table with her about his day, then having sex with her (with the uncomfortable sounds of creaking plastic) before washing out her removable vagina and retiring for the night. Hm. But one day Nozomi’s eyes open after he leaves, and she creaks out of bed and walks across the room to look out the window. “Beautiful.” Suddenly the doll has a “heart” (think the Tin Man or Pinocchio), and morphs into actress Doona Bae. Nozomi soon leaves the house (wearing her French Maid outfit) to explore the world, gets a job at a video store, and falls in love with her cute co-worker (played by Kore-eda favorite Arata). To paraphrase Nozomi, “Having a heart is heartbreaking.” The more she learns about “life” (even though she has an air nozzle for a belly button and has to sneak home to get back in bed before her master gets home), the more sadness in humanity is revealed. Air Doll is charming and often funny, but it also made me cry. 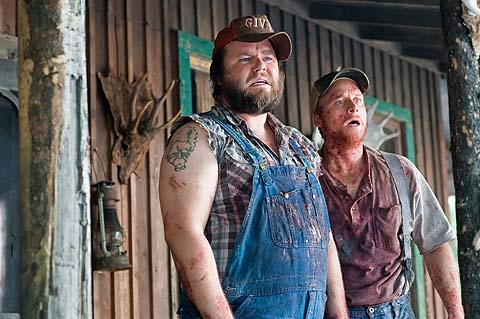 But that melancholy mood was quickly thrown out the window for my second movie of the evening, the hilarious and extremely crowd-pleasing slasher-comedy Tucker & Dale vs. Evil (7/8). In the same vein as Shaun of the Dead and last year’s SIFF-favorite ZMD: Zombies of Mass Destruction, Tucker & Dale sticks to the genre’s rules (there is lots of blood and gore, as well as bouncing coeds and dumb college boys) but completely turns the cliched plot upside-down. Tucker (Alan Tudyk, Firefly) and Dale (Tyler Labine) are a couple of hillbillies that just want to enjoy their new “vacation home” (i.e. decrepit mass-murderer’s shack in the Appalachians that happened to come real cheap). But a truckload of obnoxious, over-privileged college kids have also come out to the sticks to go camping nearby. One big misunderstanding later, and carnage galore is spurting everywhere as the kids die one by one, much to the bafflement of the good-hearted and sometimes kind of dim Tucker and Dale. Let me just say this: The movie is really, REALLY funny! There were parts where I guffawed and turned to share my laughter and disbelief with the strangers next to me as the plot got more and more ludicrous. And by the time the closing credits rolled, the movie practically got a standing-O from the enthusiastic and super-pleased audience. I would not be surprised to see this flick high on the Audience Favorites list when all is said and done, and it is only the first day of the fest!