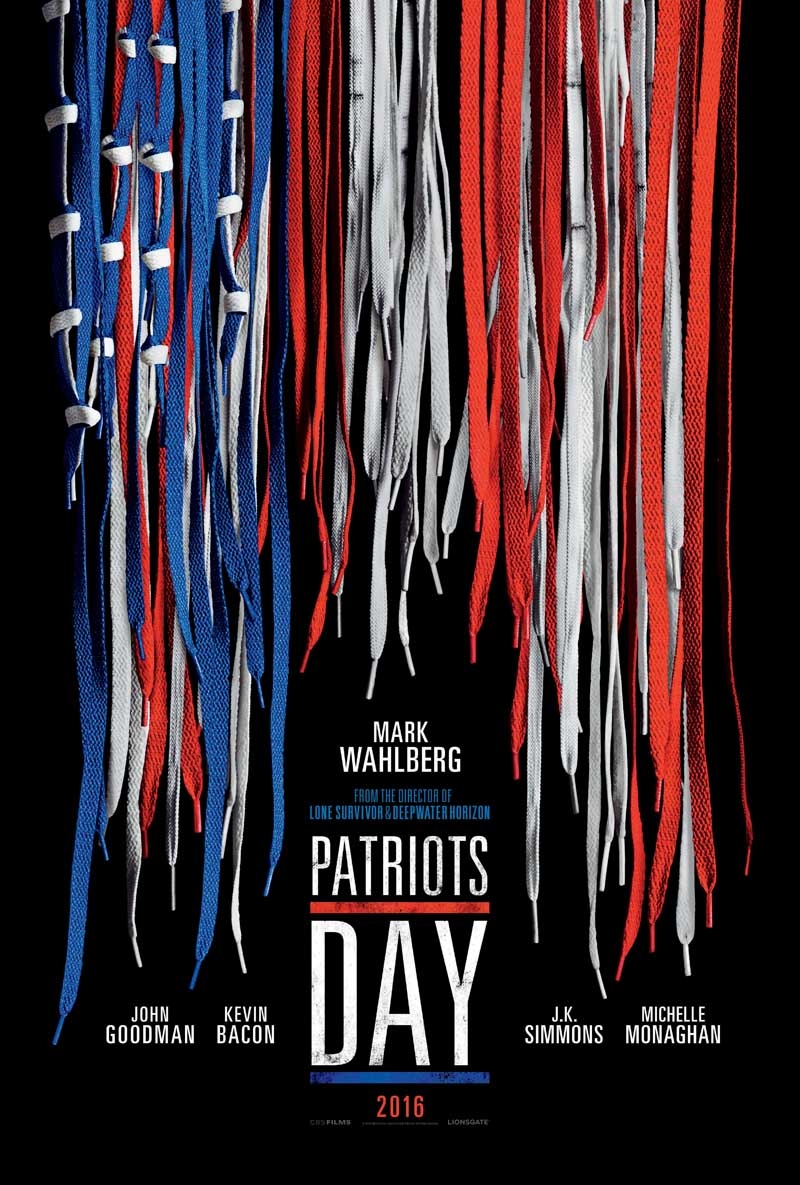 I remember when the Boston Marathon bombing occurred because my office had a co-worker that was running the race that year. As the headlines splashed across social media, we immediately thought of our friend and his family that were all there to support him. It took a nerve-wracking hour or so to find out that they were all OK (he had finished the race already, and they were celebrating in a basement bar with no cell phone reception). But that seeming eternity of not knowing was terrifying. These days of seeing a terrorist attack in one city after another, hitting everyday locations like a street market, or a nightclub, or a sporting event suddenly makes the world seem really small as you take a yet another head-count of your loved ones.

Director Peter Berg tackles the Boston Marathon bombing of April 15, 2013 (known locally to Bostonians as “Patriot’s Day”) in this crowded yet brisk nail-biter of a movie. Though the film’s initial morning-of introduction of a couple handfuls of characters is a little confusing at first (a young married couple, a young Chinese man, a cop, another cop, another cop, a couple brothers eating cereal), it all starts to quickly fall into place, as they are all directly related to a chain of events that brought the city literally to a standstill.

Though the characters have, for the most part, real-life counterparts, the one composite character is Sgt. Tommy Saunders (Mark Wahlberg), a Boston officer who, for the day, has been demoted to be an event cop at the marathon. His character manages to be at the finish line explosion, then directly involved with helping piece together the investigation when the FBI steps in with their warehouse-size operation, then finally showing up at the shootout in the Watertown suburb when the Tsarnaev brothers are cornered. It is a little convenient to have one guy at all major points of the story (which I’m sure some will quibble with), but it is really one of the few drawbacks of the film. You have to admit, Wahlberg is an appealing Every Man to have on your side.

It is hard to call a movie like Patriot’s Day entertaining, because the true story is really so terrible and fresh. Plus, I know that some will find issue with the fact that the filmmakers took some dramatic liberties for the sake of storytelling. But as an audience member with just-enough knowledge of the actual events, I thought Patriot’s Day was compelling, anxiety-inducing, and ultimately moving. As the film ends with interviews with many of the real folks portrayed in the story, I heard more than a few sniffles in the audience, and well as total silence when the credits started rolling. Some may cry that the film is too soon, but I found Patriot’s Day to be a respectful tribute to the resiliency of Boston and its citizens during a horrible time.