Go figure that a film slapped with a title like Sex Tape might not be the most fun you have at a theater this year. Frankly, I was embarrassed for everyone involved in this woefully forced, unfunny comedy.
By Vickieon October 13, 2014
0 Comments
Our Rating 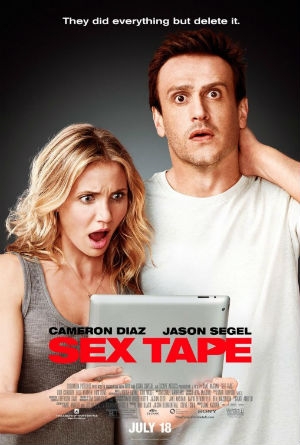 Cameron Diaz and Jason Segel co-star as Annie and Jay, a once-sex-crazed couple who have settled into the everyday (and comparatively chaste) routine of married life and parenthood. In a misguided bid to reignite the passion in their relationship, they decide to shoot themselves performing every page’s worth of positions from The Joy of Sex. And, even though he’s is obsessed with Apple products and owns a vast array of computers, tablets and smartphones, Jay apparently has no idea what synching all his devices means… so he inadvertently uploads the ensuing dirty movie onto every Mac he owns and has ever owned. Including the ones he’s given away as gifts.

Cue a ridiculous, eyeroll-inducing and hugely tedious series of outrageous events as a panicked Annie and Jay try desperately to retrieve the assorted iPads they’ve handed out to family and friends before anyone watches the newly uploaded sex tape.

From the get-go, director Jake Kasdan’s misfire feels labored, as though the entire screenplay was WRITTEN ALL IN CAPS SO YOU DON’T MISS ANYTHING BECAUSE OMG YOU GUYS THIS IS SO OVER THE TOP AND HILARIOUS. Watching an opening montage of chemistry-less Diaz and Segel having sex over and over again, each time with louder screams and moans and more outlandish locations, was painful. Nevermind the freaky digital (?) effects that were applied to their faces to make them appear college-aged. They looked like wax figures. And everything just went downhill from there. The proceedings are stuck in what feels like a badly rendered knock-off of better films of this ilk. Think: The Hangover or, in a less R-rated sense, Date Night, where ordinary people wind up in crazy situations because of a mistake.

Believability is a big problem with Sex Tape, except in one area. It’s not hard to believe that the spark has gone from Annie and Jay’s marriage because, as mentioned, there is ZERO chemistry between the actors playing them. Diaz is too stiff to pull of manic and zany without it seeming shrill and shrieking, and Segel is just dull. Their exchanges are flat, whether they’re meant to be trading lusty quips or shouting at each other over the fate of the video they seek, and I always felt like I was watching actors trying to act frazzled. (And doing so poorly.)

Credit goes to some of the supporting players for saving this dud from a zero-pie rating, though. Rob Corddry, Ellie Kemper and an uncredited Jack Black were the only things in this movie that made me laugh (despite myself), and Black’s scenes were like a sudden, all too fleeting breath of fresh air.

Still, they were not enough to save it. The film is 94 minutes of my life that I will never get back.