Okay, people. Remember when I wrote about Furious 7? Or Fate of the Furious? Remember how much I lurrrrrrved those films and declared them thoroughly worthy of REVIEWS WRITTEN ALL CAPS?

Well, allow me to share with you this breaking news: THE FRANCHISE HAS DONE IT AGAIN. And no amount of capital letters will adequately convey how much I enjoyed this epic, explosive, exceptionally funny action-comedy. The best part? It’s an entirely self-contained story, so you can grab your popcorn, settle into your seat and let its awesomeness wash over you even if you’ve never seen a single frame of any part of the Furious franchise. 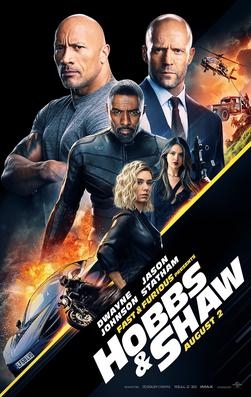 Yanking its two titular ensemble players out of the Furious fray and into their own reluctant-brothers-in-bickering-arms project, Hobbs & Shaw might just be the perfect summer blockbuster: it’s got high-octane action, crazy stunts, big laughs, a touch of sci-fi and two of the best – and best-kept-secret – uncredited A-list cameos in recent memory.

Director David Leitch, hot off Deadpool 2 and Atomic Blonde, takes what fans love most about Luke Hobbs (Dwayne Johnson) and Deckard Shaw (Jason Statham) – namely, their hilarious mutual dislike of each other and their collective ability to kick just about any ass – and dials it all up to 11. In this first of what feels like a blossoming new franchise, the duo are recruited to work together when a nefarious organization named “ETEON” weaponizes a lethal virus and makes plans to unleash it on humanity.

Why? Because humans are destroying the planet, and ETEON’s enigmatic and unseen leader believes only a massive global purge of the weaker elements of humanity can save it. ETEON’s unofficial spokesperson is Brixton (Idris Elba), a super-powered human/cyborg hybrid and former cohort of Deckard’s, who’s been given one of cinema’s most recent tropes: the villain with a quasi-noble, if hugely misguided, cause.

ANYHOO, the whole escapade kicks off when Deckard’s estranged, covert-operative younger sister Hattie (Vanessa Kirby) intercepts the virus en route to ETEON, injects herself with it as a way of keeping it out of the wrong hands… and winds up wanted by ETEON, Brixton, MI-6, the FBI and anyone else with knowledge of what the virus can do.

But let’s be honest: do the intricacies of a decidedly non-intricate plot really matter in a movie like this? Of course not! Neither do the rules of physics, science or just the concept of reality – you can happily suspend your disbelief at the door as Hobbs and Shaw set forth to save the world by any ridiculous, death- and logic-defying means (that aren’t truly) necessary (for anything other than leaving the audience slack-jawed at their sheer audacity). The Rock using a chain and HIS BARE HANDS to tow a helicopter WHILE IT’S IN FLIGHT? Sure, why not!

As fun and outlandish as it is heavy on expertly choreographed fight sequences and inventive chase scenes, Hobbs & Shaw fully delivers on its summer-movie promise. It clips along at a terrific pace, never pausing long enough to bore the audience, and regularly introduces new sets of characters who keep the proceedings fresh and interesting.

Johnson and Statham are easily one of the big screen’s most watchable new frenemies, and their antagonizing banter is sharp, crisp and laugh-out-loud funny throughout. Kirby is a solid addition to the cast and proves herself worthy of joining the fellas on future outings, while Elba makes for a damned sexy foil. And the two very-well-known actors making the aforementioned high-profile cameos (which result in some of the film’s funniest scenes) are inevitably bound to return when our heroes set off on their next adventure – I’m pretty sure audiences will revolt if they don’t.

I will say this: this movie didn’t earn a full pie because of two minor quibbles I had. One is the very obvious age difference between Kirby and Statham – their characters are only supposed to be a few years apart, but there’s a 20-odd-year age difference between the actors. He’s actually old enough to be her dad! The other is that the film’s final showdown begins at night, in pitch darkness, and becomes bright midday daylight after only several minutes have elapsed in the characters’ lives. Again, super-trivial stuff, but enough to deduct a slice.

Otherwise, though, Hobbs & Shaw was everything I hoped it would be and more, unexpectedly infused with themes of family, brotherhood and even environmentalism. I had a grin slapped on my face throughout and I can’t wait to see where the characters go next. No doubt, wherever it is will be a LAND FILLED TO THE BRIM WITH CAPS.

The Blu-ray is chock full of stuff if you can’t get enough. Plenty of deleted/alternates scenes, a whole bunch of short featurettes about the action, the actors, wresting, and even the dog. There is also a feature commentary from Director David Leitch.