One man leaving the theater muttered that it should have been called Snow SLOWLY Falling on Cedars…
By Lindaon December 27, 2014
0 Comments
Our Rating 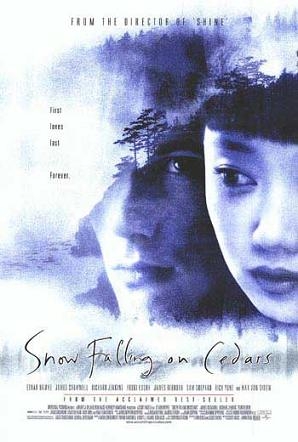 I have to say that this is probably the most gorgeous film of 1999… every shot is beautiful: close-ups of characters, snowy cedar trees leaning in the wind, lighthouses, beaches, etc. Certainly a good ad for the Northwest (apparently it was filmed at Bainbridge Island, WA and a town in British Columbia). Afterwards, the Seattle audience was laughing, “Now, WHEN did they film this? When has there been a snowstorm like that around here recently?”

This film staggers three main stories in a Northwest island community previous, during, and shortly after World War II: a romance between a local boy and girl, he is white, she is Japanese (the adult versions are played by tormented Ethan Hawke and pensive Youki Kudoh); the re-location of Japanese-Americans to internments camps during the war; and the “present-day” 1950s murder trial where a Japanese-American man is accused of killing a white fisherman.

As far as recommending it… hmmm… My friends and I discussed this after the film. We had all read the bestseller book by David Guterson, and had found it very readable (though not quite “brilliant”). We decided that the film could be recommended to people who’ve read the book (so you don’t have to deal with the “what the…?” factor of the meandering flashbacky-ness of the film’s style), to people who appreciate excellent cinematography, and to people interested in the Northwest and its history (since the film addresses the oft-overlooked history of the Japanese-American internment camps during WWII).

Otherwise, skip it… it drags in places (one man leaving the theater muttered that it should have been called Snow SLOWLY Falling on Cedars), and the murder mystery part of the story works much better in print. On film, it just seems an uninteresting framing device. The film would have been much stronger if the story just concentrated on the WWII race relations, as scenes like that of local whites watching their neighbors being rounded up and taken away on a ferry, are easily the most powerful and compelling parts of the film.