In addition to Riz Ahmed’s great performance, the star of Sound of Metal is the sound design, taking us deep into the world of a drummer suffering from hearing loss. 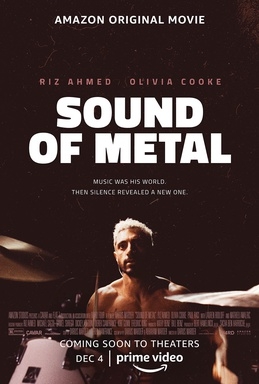 A couple years ago, I abruptly lost my hearing as a strange side effect to a sinus issue. I was probably only hearing at a level of about 20%. Co-workers would tell me that they would said hi to me, but I’d walk right by them, clueless. I’d be in meetings where I’d be completely at a loss if I couldn’t see the face of the person speaking, where I’d desperately try to read their lips. It was a very sudden hearing loss, and for me lasted about three weeks. It was frankly kind of terrifying.

In Sound of Metal, Riz Ahmed plays Ruben, a drummer in an experimental metal band with his girlfriend Lou (Olivia Cooke). They tour the country in a funky Airstream RV, staying over night in parking lots, sleeping in, creating music, and performing. There is an edge to their relationship, and you realize they are both recovering addicts. But all seems to be going well until Ruben’s hearing abruptly switches off. He can play his drums and songs by memory, but is panicked, knowing that he can’t hear cues. Music is his life. This has to be a temporary problem, right?

A call to his drug counselor sets him up at a countryside facility for deaf people. Ruben is lost, unable to follow the signing conversation of his cohorts. The head of the facility, Joe (the wonderfully weathered Paul Raci), tries to guide him through a process of learning, acceptance, and peace with his condition, but Ruben stubbornly holds on to the hope that his deafness is only temporary. If he can just raise money for cochlear surgery, he can hear again and carry on with his previous life.

With its fine performances all around, led by the excellent Riz Ahmed and including a cast of many deaf actors, Sound of Metal works as a solid drama with a unique character arc. But what makes the movie truly memorable is the fascinating sound design (which I’m sure will be showered with awards). When Ruben is the focus, the sound of the film itself reflects his auditory experience. When he can’t hear, we can’t hear. When his hearing goes out, it starts with a high ringing then muffled tones then silence. When he seeks out special treatments, we hear how it sounds to him.

The best, most memorable movies give us a glimpse into other people’s lives and give us empathy towards those whose experiences may be different from our own. With its impressive and immersive experiment in sound design, Sound of Metal does just that in a wholly unique way, making it one of the most interesting films of the year.