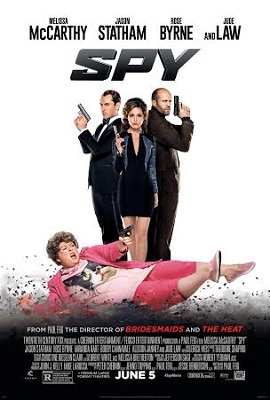 Melissa McCarthy cements her status as a cinematic force to be reckoned with in this super- fun action-comedy from writer-director Paul Feig. In it, she stars as Susan Cooper, a mild- mannered CIA agent who’s been relegated to a desk job while her suave super-spy partner, Bradley Fine (Jude Law), jets around the world, saving it from ne’er-do-wells under Susan’s skilled from-back-at-HQ coaching. But when Fine is smoked by perpetually cranky über- villainess Rayna Boyanov (Rose Byrne, in a spectacularly hysterical turn) – the only person who knows the whereabouts of a highly sought-after nuclear device, and who also threatens to expose the identities of all of the CIA’s field agents – the folks at Langley find themselves in a pickle.

How can they find a virtual-unknown agent to gather intel from right under Rayna’s turned-up nose so that they might avert a global nuclear catastrophe?

Before you can say double-oh-seven, Susan offers up her services – much to the profound chagrin of hot-headed, self-absorbed, dim-bulb fellow agent Rick Ford (Jason Statham, who has a blast with his gloriously ridiculous role) – and is sent overseas. But what starts as a simple observe-and-report mission gets much more complicated, and a thousand times funnier and more exciting, when Susan ignores orders from her boss (Allison Janney), embraces her genuine talents as a CIA agent, and successfully infiltrates Rayna’s inner circle.

Seriously, everything about Spy just works, from the running gags (Susan’s frumpy disguises, Rick’s increasingly outrageous tales of past glory, Rayna’s icy put-downs) to the profanity-laden hostile banter between characters to the countless comedic set-ups that are paid off perfectly. Spy is a great comedy and a great action film, and – in a rare feat – neither genre ever suffers for the sake of the other. The filmmakers clearly put just as much effort into crafting the clever words as they did into choreographing complex, impressive fight and chase sequences.

Melissa McCarthy has never been funnier, and her co-stars match her quip for quip – both Byrne and Statham make for terrific, antagonistic foils, and supporting players like Peter Serafinowicz and the amazing Miranda Hart (who plays Susan’s best pal, Nancy) just make the cast that much richer. A movie is only ever as good as its weakest player, and Spy has none, thankfully.

I laughed out loud OFTEN during the film and, by the time the closing credits rolled around, found myself already looking forward to its inevitable sequel. Here’s hoping Fox greenlights one ASAP.