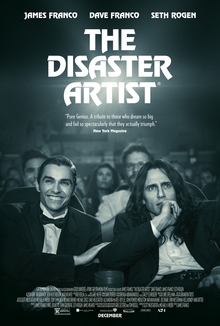 I have some friends who LOVE the notoriously terrible movie The Room, so I took them up on an invitation to come over for their umpteenth watching of the video. After 10 minutes, I waved my arms helplessly to pause the film. “What IS this?!??! What am I watching??!!?” I was completely baffled. The lead actor (and director and producer and screenwriter) was this odd guy with a sleepy eye, long black hair, pirate shirts, and an unplaceable accent that lent to his unusual grasp on English grammar and syntax. My friends clapped in delight at my flailing, and pushed Play again.

Tommy Wiseau’s The Room has gained a fervent cult following of fans. It’s vaguely competent, but terribly acted, head-scratchingly confusing, and unintentionally hilarious. James Franco and his buddies obviously are part of The Room‘s adoring audience, as The Disaster Artist is basically a fanboy tribute to Tommy Wiseau and his creation.

Based on Room actor Greg Sestero’s memoir about the filming and his friendship with Wiseau, The Disaster Artist is a full-on funny and charming bromance starring two actual brothers (James Franco as Wiseau, and his brother Dave as Sestero). The two unlikely friends meet in a San Francisco acting class where Greg is dazzled by the… errr… fearless interpretive style of his colleague Tommy who writhes around on the stage hollering, “Stella!!!” They become fast, inseparable friends with the worldly Tommy swooping young Greg into his world of nice cars, seemingly endless money, and a seemingly bottomless access to cash. When Tommy says they should take their chances and go to Hollywood to become stars, Greg jumps at the chance and jumps into Tommy’s Mercedes.

The Disaster Artist is about the passion of an artist to create, whether or not that person actually has talent. Just do it! If they hate your auditions, just make your own movie! Tommy puts his ideas to paper, assembles a cast and professional crew, and sets out to make the amazing movie that is in his head. The thing is, one man’s Citizen Kane is another man’s… The Room. When his movie makes its debut to a packed house, raucous laughter is not what he expected. The Disaster Artist may be over the top, but it has a gentle touch with Tommy. He may be delusional, but you gotta feel for the guy.

Now, I’ve seen The Room, so The Disaster Artist had me constantly giggling throughout. Fans will love seeing Franco’s Tommy throwing a football to Greg, as well as the painful multiple take by take by take attempts to nail the rooftop “Oh, hai Mark!” scene. There are tons of cameos in the film. I totally didn’t recognize Zac Efron as one of the hothead characters in the film. Jackie Weaver steals her scene as a cast member who is a grandmother that suffers through tyrannical directors like Tommy and insufferable working conditions because she just loves the movies. Seth Rogen manages to keep a straight face (even while slapping a palm to his forehead) as the beleaguered script supervisor. And there are many many more (Hi, Judd Apatow!).

That said, I honestly have no idea how The Disaster Artist would play to an audience that hasn’t seen The Room. The closing credits, with side-by-side scenes comparing the original to the recreation, show how Franco’s weird cinematic creation is not exaggerated, but is indeed a spot-on impression of the real Tommy. The Disaster Artist ends up being a hilarious and heartfelt love letter to bad movies and the fans who love them. 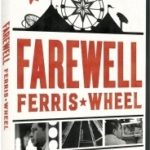 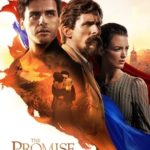