The glory of seeing Jean-Luc Picard on the big screen alas doesn’t make up for the fact that this is another Star Trek movie that kind of sucks.
By Lindaon April 27, 2015
0 Comments
Our Rating 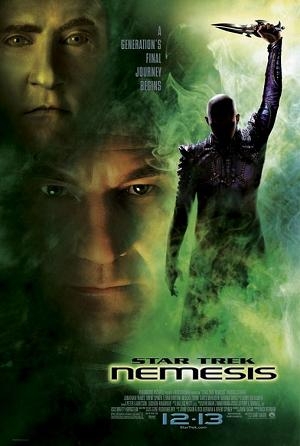 LINDA: I have to say, at the first sight of the Enterprise I felt the same old tingle of excitement. I *love* The Next Generation, and still can’t help but look forward to the new movies. Unfortunately their movies, except for the one with the Borg Queen (First Contact), have been pretty much forgettable.

TIM: Even though they are somewhat forgettable, the Star Trek: The Next Generation movies never cease to bring out the space geek in me. I knew immediately that I watched the TV series too closely when I was able to fill in some small plot holes for Linda, based on what I remembered from the show. I swear, I almost blacked out after the opening scenes of the movie, when the entire screen was filled with Jean-Luc Picard’s face. The giddy schoolboy came running to the front of my mind and I couldn’t hold back the cheese grin.

LINDA: Nemesis takes its time getting to the action. We see a kind of cool sabotage of the Romulan senate, but then the film takes its time reintroducing us to our beloved characters (with a wedding!), and eventually gets around to revealing the bad guy of the story: Praetor Shinzon (Tom Hardy). Without going into revealing details about who he is, let’s just say that he was spawned out of the merciless mining colony on Romulus’ neighboring planet Remus, and he’s got Picard’s number.

TIM: I was surprised with the lack of things to do for some of the major characters. I think we see and hear Worf (Michael Dorn) maybe 3 or 4 times, and as for Dr. Crusher (Gates McFadden), she may as well have been a hologram. OK, not that Crusher was ever a huge character, but if you’re going to write her into the story, let her do something. Counselor Troi (Marina Sirtis) has a bit more to do, but she ends up being the quasi damsel in distress. Emote, Deanna, emote!

LINDA: There is a cool new icky alien race, the Remans (if they are neighbors of the bad-ass Romulans, how come we’ve never seen them before?). Praetor Shinzon’s sidekick Reman Viceroy looks just like F.W. Murnau’s Nosferatu, but with sweatier gray skin and even more shudder-worthy pointy teeth.

TIM: The Remans seemed almost wasted. They were briefly introduced and we see them often enough, but there was no character development around them. Sure, they look like scary vampire-like creatures, but do they DO anything? The Reman Viceroy (Ron Pearlman) was a bit of a exception to this; he did stand behind Shinzon and whisper advise every so often. He had a special ability that was never explained. Do all the Remans have it, or just him? TELL ME MORE!

LINDA: Of course the movie throws in another fantastic-looking duel between the Enterprise and the bad guys’ ship, including a crash that more than a little bit reminded me of a car accident I had last summer.

TIM: The crash scene was very interesting. Oddly enough, they didn’t loop the footage, as they’ve done in the past, but showed a ship slowly shatter, almost like glass would if you slammed a big piece of metal into it. (Please stop crashing the Enterprise, someone could get seriously injured!)

LINDA: Unfortunately, there was a lot about Nemesis that felt recycled… and recycled in a half-assed way. There wasn’t really much original about the plot, and at times the movie was just dreadfully dull. Picard’s relationship with the bad guy could have ranked way up there with some of the best mind-benders of the series, but the filmmakers just couldn’t find the spark. Overall I was sadly disappointed.

TIM: Even though Nemesis wasn’t stellar, all the Trekkies in the world will flock to the theaters and fork over their well-earned moolah to be entertained for a couple hours. Hell, I had already planned on standing in line on opening weekend, but sometimes the perks to this job are well worth it. If you are a Trekkie, go see it. If you aren’t a Trekkie, please don’t scowl at us when we are standing in the rain, waiting to see it for a second time.