The Age of Adaline

It isn’t until about the halfway point that The Age of Adaline suddenly gets interesting, and hints at movie it could have been. Somewhat surprisingly, the person who kicks this movie up a notch is Harrison Ford.
By Lindaon July 12, 2016
0 Comments
Our Rating 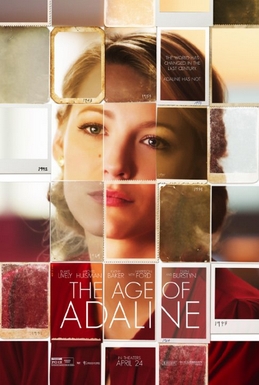 Opening with an earnest narration straight out of a Ken Burns Americana documentary, we learn that Adaline, born in 1908, was in a car accident where, by some magic involving being submerged in cold water and getting zapped by lightning, she suddenly lost the ability to age. Forever in limbo at age 29, she goes through decade after decade, having to change her identity over and over, while watching her young daughter age to an old woman. This is an intriguing concept, and Blake Lively, with her timeless loveliness and sad eyes, plays Adaline like an enigma. She is the friendly co-worker who keeps to herself, who keeps out of the limelight, who goes home to the companionship of the latest generation of her beloved dog.

In modern San Francisco, Adaline, now known as Jenny, catches the eye of a handsomely shaggy man across the crowded room of a swanky New Year’s party. Despite her initial rebuffs (it is time for Jenny to move on and become someone else to avoid suspicion), Jenny/Adaline and the lumbersexual Ellis get busy, with him proclaiming his true love after like a day. This is sweet, a bit silly, and honestly kind of dull. Is there anyone less interesting cinematically than a 30-ish philanthropist? He doesn’t really *do* anything.

It isn’t until about the halfway point that The Age of Adaline suddenly gets interesting, and hints at movie it could have been. Somewhat surprisingly, the person who kicks this movie up a notch is Harrison Ford. (No disrespect, Harrison, but when your appearance in the new Star Wars trailer proved to be the most exciting thing you’ve done in years, you have to admit there has been a dry spell.)

Ford, as a 60-something man named William, recognizes Adaline as his frozen-in-time lost love that got away some 40 years earlier. This sort of plot twist almost shouldn’t work in the age of Googling and stalking folks from your past via social media, but the look on Ford’s face when he sees Adaline utterly and totally sells it. Likewise, Lively seems to up her game when working with a seasoned pro like Ford.

But as Hollywood would rather obsess over young love rather than old love lost, the focus stays on Adaline and Ellis. Where is this other movie we are teased with? Ford is so good, I wanted to see The Age of Adeline rewritten from the perspective of William, which would have been much more interesting. But with rewriting not an option, I’ll just have to settle for this version of an intriguing idea, a story that I think had great potential, but was missing the spark to make it great.