A girl is either a murderer, or simply in denial, as she dumps her newborn in a bathroom garbage bin.
By Lindaon July 25, 2014
0 Comments
Our Rating 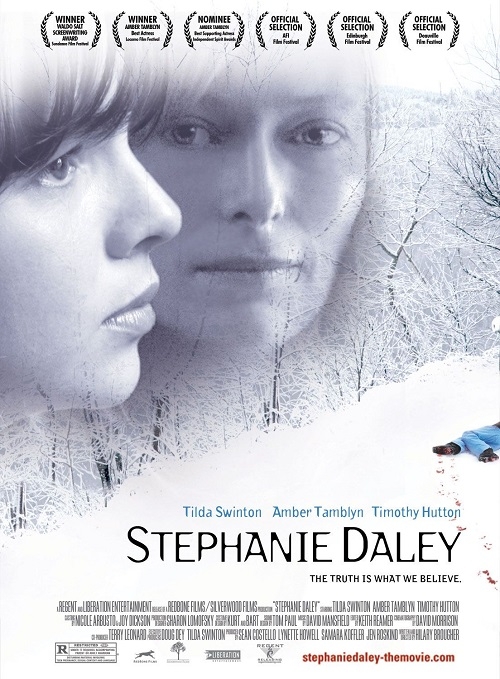 While watching Stephanie Daley, I couldn’t shake the feeling that I had come across basically this exact story very recently. It was a novel I read called Plain Truth by Jodi Picoult, that told a story of a teenage girl accused of infanticide in a Pennsylvania Amish community. The lawyer woman who ends up defending the girl is an older professional, and she is pregnant. Stephanie Daley‘s titular character is a teenager accused of infanticide, and the psychologist who has been assigned to evaluate is an older woman… who is pregnant. But the difference between Plain Truth and Stephanie Daley is, well, I actually thought Stephanie Daley was written convincingly, the characters were more complex, and it wasn’t driven by clichés (like the book Plain Truth, which I kind of hated). So it didn’t come as a surprise when I found out that this little indie was the winner of the Waldo Salt Screenwriting Award at the 2006 Sundance Film Festival.

Amber Tamblyn (TV’s Joan of Arcadia) plays Stephanie, a teen who dumped her baby in a public bathroom trash bin at a ski resort while on a school ski trip. Ethereal Tilda Swinton plays forensic psychologist Lydie Crane, a 40-ish woman who is gingerly several months pregnant, living in constant paranoia that she will lose her baby, like she did during her last pregnancy. If the film were more cheesy, it would have made obvious parallels between the teen and the adult, but it is refreshing that it is presented more as a matter-of-fact condition without dramatic visions or obvious nightmares. Tilda (as I prefer to call her) is fighting her own demons, plus is trying to quell her suspicions about her distant husband (Timothy Hutton)—she has her own personal issues beyond her current case.

Stephanie seems like a nice girl, not much of a troublemaker, and it is revealed in flashbacks that she got into her situation as a result of some innocent bad judgement. Heck, she hardly ever went to parties, so the fact that she ended up alone in a room with a smooth-operating, just-graduated senior was pretty much by chance. Her spaced-out response (rather than lots of screaming and crying and tugging of hair) to her party-rape is almost more effective and devastating. Months after the summer party, there she is in a bathroom stall in a ski lodge. Let me just say, watching the scene of her delivery is emotionally excruciating and horrific. It could have been more explicit, but thank goodness the filmmaker realized that showing the girl’s anguish on her face was effective enough.

While the acting in Stephanie Daley is across-the-board great, it is Amber Tamblyn as Stephanie that really stands out. I’d never seen Tamblyn in anything before, and was blown away by her mature performance. Seeing her in this makes me want to check out Joan of Arcadia, which got such good press (then of course was cancelled). Tilda Swinton’s character reminded me a bit of her role in The Deep End… which means she is warm, not frosty (or “alien-like”, as a friend of mind once accused). She is also, as usual, excellent in what is basically a two-character show.

These ripped-from-the-headlines films can often be sensationalistic, but thankfully Stephanie Daley is restrained, making it not only tolerable to watch, but complex and though-provoking—and surprisingly it doesn’t pass judgment.