No one who’s aware of the situation at the Stoker residence thinks it’s on the up and up, least of all India, who has every reason to be suspicious. 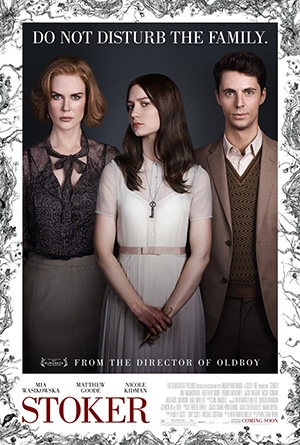 Somehow an “elegant thriller” titled Stoker about a young woman whose estranged uncle surfaces after the death of her father conjures up spooky, noirish notions of vampires and writerly types. It also seems strangely old-timey. It takes a moment then, to adjust to the fact that the film is set in the present day, where people wear gothy clothes and live in rambling estates, but talk on cell phones. This odd juxtaposition sets the stage for the tone of the movie, which is at once arty, creepy, boring, and, I think, a little funny.

Following the untimely death of her father (Dermot Mulroney), India Stoker (Mia Wasikowska) is unsettled by the arrival of an uncle she has never seen before. Charles (Matthew Goode) settles into the Stoker home under the pretense of helping India and her widowed mother (the alienlike Nicole Kidman) get by. That’s pretty thoughtful, if you consider Frenching your sister-in-law and murdering any interlopers “helpful”. Some people just, you know, stop by with a sponge cake.

No one who’s aware of the situation at the Stoker residence thinks it’s on the up and up, least of all India, who has every reason to be suspicious. She’s got a freaky, hateful mother to deal with, and this new uncle seems questionable at best. He’s at once intriguing and repellant, but as she slowly pieces together his past, she begins to feel more and more connected to this strange new father figure. He has been sending her saddle shoes since she was a toddler, replacing them with larger sizes as she grew. Now, as she stands on the brink of maturity, he presents her with her first pair of black pumps, essentially ushering in her new identity as an adult. It seems as though he’s been grooming her from afar all her life, and now that they’ve finally met, the last piece of the puzzle can fall into place as India discovers her own dark side.

Sadly, the pieces of the puzzle don’t quite come together for Stoker as a movie. The story itself is eerily fascinating, the performances solid, and the cinematography truly unique. Somehow, though, it fails to pop. The strikingly arty style seems out of sync with the twisted, sometimes gruesome, nature of the story, it’s difficult to feel invested in the characters, and there’s a general lack of punctuation between events. India could just as easily be looking at her shoe collection or getting accosted, eating soup or fighting with her mother. The end result is an oddly monotone film that evokes boredom when it should be piquing curiosity.