Old is new again! Unless it is actually old, or it’s completely redone, or it’s just repeated. Whatever… let’s blow some things up!
By Lindaon July 12, 2016
0 Comments
Our Rating 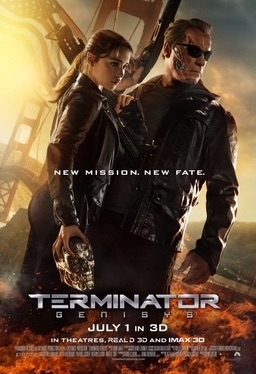 The part about time travel that has always bent my mind is that, in theory, any plot can be erased by just going back a little further each time and changing things until you get the result you want. Infinite timelines, infinite possibilities. The original Terminator and Terminator 2 worked earnestly by taking a timeline (or two) that double-backed upon itself… and this method kind of made sense, until you really started to think about it (like, why aren’t multiple Terminators and multiple soldiers sent further and further back in infinity until whatever is supposed to happen doesn’t happen… or… wait a second… I’m confusing myself). Terminator: Genisys takes this squishier logic, throws it into a blender, and tries to pay homage to the classic early films while at the same time completely ripping them off and offering nothing really fun in return.

In the dystopian future, John Connor (earnest dullard Jason Clarke) is leading the renegade humans in the last battle against the artificial intelligence Skynet, who blew up the world on what became known as Judgement Day. As we all know, the point of these films is to stop Judgement Day and the ensuing carnage before it happens. Theoretically this is accomplished by going back in time and (a) killing Sarah Connor in the past so she doesn’t birth rebel John, or (b) protecting Sarah Connor for exactly the same reason. As before, soldier Kyle Reese (Jai Courtney) volunteers to go back to 1984, coinciding with a beefy young Terminator that looks an awful lot like Arnold Schwarzenegger. Or that is what we expect. But because time travel is magic, this time around Sarah Connor (Emilia Clarke) is already in badass-mode way ahead of schedule, and she already has an older version of Schwarzen-ator with her, whom she affectionately refers to as “Pops” (ugh).

A leap in logic and information requires the characters to jump forward to 2017 where, in this new timeline, Skynet is taking a different route, with plans to take over the world via a new operating system called Genisys. As modern humans have to have the latest toys, everyone is downloading the technology in anticipation of the launch… but this launch won’t just involve a reboot of your phone, know what I mean? (Rockets go flying…) It is the job of Sarah Connor, Kyle Reese, and silver-haired Schwarzen-ator to take down Skynet/Genisys (again).

When Terminator: Genisys is derivative, it just makes you miss the thrill of the original movies. When it veers off into its own timeline, it’s just kind of annoying and badly written. There are, however, a few folks that give us a little peek at a better movie buried in this mess. J.K. Simmons, fresh from his Oscar, shows up as a cop that recognizes the human duo from 30 years before. His presence offers some real comic relief, even though he barely has a character to work with. There is Schwarzenegger, who kind of plays himself, and plays himself again… and in these various moments, when he puts on his steely-eyed stare, you are reminded of how awesome and scary he was in the first film. Finally, there is Matt Smith, who jumps out of his Tardis to perhaps shake things up a bit. No spoilers, except screw dull Kyle and Sarah… let’s follow this guy’s timeline instead.

Apparently, we are promised/threatened with a trilogy of this incarnation of Terminator (before rights revert back to James Cameron). If we are to sit through more of this nonsense, they’d better whip this reinvention into shape or… well… I won’t be back. (Drumroll… crash!)