Where the relaunch movie The Muppets felt like finding old forgotten friends, Muppets Most Wanted slips right back into zany Muppet-caper mode.
By Lindaon October 13, 2014
0 Comments
Our Rating 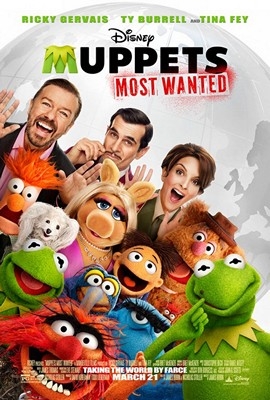 Picking up exactly where The Muppets left off (as in, the final song and dance number just ended, and “The End” flashes on screen), the Muppets decide that with their newfound success, they should take their comeback show on the road. And it you have a new road adventure lined up, heck, sounds like you should have a sequel! (Cue the song and dance number “We’re Doing a Sequel”.)

Kermit the Frog, lacking the self-confidence that he always does, interviews an eager tour manager with the suspicious name Dominic Badguy (Ricky Gervais). The enthusiastic troupe hires him, and immediately their European tour becomes a success. But just when you think all is going well, Kermit is kidnapped and thrown into a Siberian gulag, and he is replaced by escaped criminal mastermind Constantine, who looks exactly like him (well, except for the big mole on his face and the really thick Russian accent). Turns out Dominic really IS a bad guy… he is Number Two to Constantine, and they have a plan to use the Muppets tour to set up elaborate robberies across Europe, crowned by, well, the Crown Jewels in the Tower of London!

Whereas The Muppets wore its feltly heart on its sleeve with its cornball (yet winking) earnestness that made me tear up multiple times, Muppets Most Wanted is more of a slapstick mystery adventure. In addition to Gervais, the main humans are Ty Burrell (who was my favorite) as a French Interpol agent who is paired with Sam the Eagle, as well as Tina Fey as a severe Russian prison guard who falls more than a little bit for Kermit while he is trapped in the gulag. I won’t spoil the human cameos (and there certainly are plenty), because half the fun is seeing who randomly pops up in a scene (though I have to say, P. Diddy is losing the element of surprise with his media saturation these days).

It is fun to see this Muppets resurgence, especially when such affection has been made to bring these characters back. I love that the humor is timeless, and that these newer good movies are worthy of the legacy of the Muppet Studios!