I often forget what a great movie The Birdcage is, but I think I’ve loved it a little more with every viewing. And how can you not? It’s cheerful and witty, simple and upbeat, with subtle one-liners that slide past almost before you can catch them. More impressively, it remains as relevant 18 years after its release as it was when it came out. 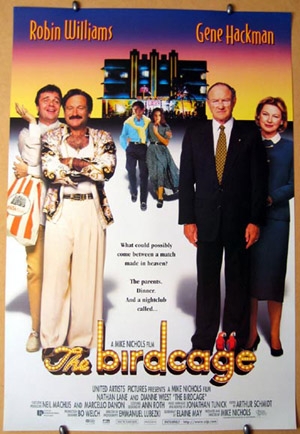 On the surface, The Birdcage could not be a more straightforward movie. When Val Goldman (Dan Futterman) and Barbara Keeley (Calista Flockhart) decide to get married, they face the daunting task of introducing their parents to one another. Val’s father, Armand (Robin Williams), owns a gay night club in South Beach, Florida, and his “mother”, Albert (Nathan Lane) is a cabaret star. They live in a lavish apartment above the club with their houseboy, Agador (Hank Azaria) in a world that is filled with color and drama. Meanwhile, Barbara’s father, Kevin (Gene Hackman), is a Republican Senator for the state of Ohio and a co-founder of the Coalition for Moral Order. Her mother, Louise (Dianne Wiest), is the sort of soft-spoken Midwestern woman you’d expect to serve as the glue in any traditional American family. In short, the Goldmans and the Keeleys are polar opposites.

Though the Goldmans aren’t accustomed to hiding their lifestyle, they are well aware that they are not considered part of the mainstream. After Val expresses his concerns about making a good impression on the Keeleys, Armand agrees to tone down their flamboyant decor and shoo Albert out of the house for the evening. He’s not pleased with the ruse, but realizes that Val’s happiness could depend upon it. And so the Goldmans set about straightening themselves up, quite literally, attempting to hide all overt signs of gayness and liberalism. Whether its stashing artwork on the patio, convincing poor Agador to wear shoes (to hilarious ends), or simply attempting to make more masculine hand gestures, Armand is willing to put in the performance of a lifetime to win over the Keeleys.

Little do the Goldmans know that the Keeleys are sweating bullets over a sex scandal involving a Coalition for Moral Order member and are equally apprehensive to meet Barbara’s future in-laws. What follows is a hilariously awkward evening filled with mishaps and misunderstandings. However, it soon becomes clear that for all their differences, the Keeleys and the Goldmans have a great deal in common. There’s a reason “We Are Family” blares constantly from the club downstairs, and it has everything to do with shared values.

Throughout the film, Albert is driven to distraction by the notion that Armand is cheating or wants to leave him. His insecurities turn out to be baseless, but they illustrate his desire for security, fidelity, and commitment. When it’s finally revealed that Armand is completely committed and wants all the same things, we see that this couple is as traditional as any other. This is what the Keeleys see by the end of their peculiar evening with the Goldmans – a kind, respectful family who are as invested in Val and Barbara’s happiness as they are. Just as in real life, it’s easy enough to say you don’t abide by someone’s lifestyle, religion, or politics, but much harder to dislike nice folks over dinner.

Though the Blu-ray edition boasts excellent picture quality, there are no extras to speak of, and the new pink (ugh!) cover art is no improvement on the original. If you already own the movie, there’s little incentive to upgrade. 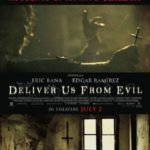 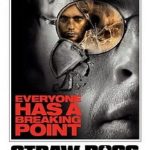