In an era when it suddenly seems as though an “us vs. them” mentality has overtaken any discussion of politics, religion, race, gender, or sexual orientation, Hacksaw Ridge is an oddly timely film. The true story of Desmond Doss, the first conscientious objector to receive the Medal of Honor, marks Mel Gibson’s first directorial effort in ten years. This thoughtful, heartfelt effort does not disappoint.
By Jenniferon May 4, 2017
0 Comments
Our Rating 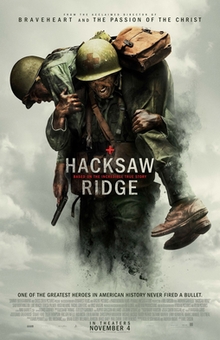 Having grown up in a household with an abusive, alcoholic father and a devoutly religious mother, Desmond Doss (Andrew Garfield) is accustomed to living in a world of opposing concepts. It comes as no surprise then, that when Desmond feels compelled to enlist during World War II, he is comfortable placing himself in the middle of a war but cannot stomach the idea of carrying a weapon or harming another human being. He knows he can help the war effort by serving as a medic, and doing so should in no way compromise his religious beliefs. He is baffled, then, when he is asked to learn the use of firearms as part of his basic training. A medic doesn’t need weapons of any sort…unless he has an interest in surviving.

Desmond is quickly dismissed as a coward and a nut. The men in his infantry want nothing to do with him, and his Sergeant (Vince Vaughn) and Captain (Sam Worthington) would just as soon see him go home than try to make this bizarre situation work. Why should the other men have to compensate for this weirdo who’s clearly going to take one step onto the battlefield and get killed?

Undaunted by snide comments, derisive laughter, beatings, and an actual military trial, Doss stands firm: he wants to serve his country without using a weapon. He is ultimately granted his wish, though it would make far more sense for him to go home to his sweetheart and civilian job and call it good. By this point, Doss has fought so hard for the right to go to war that it seems almost absurd that actual combat still lies ahead, but it does.

As the infantry enters the Battle of Okinawa by way of Hacksaw Ridge, the men are cast into a horrific scene. Rats clamber around on the bloodied bodies strewn across the ground, and within moments the first soldiers are blown to bits. Enemy soldiers, bullets, and flame-throwers seem to emerge from nowhere. Seriously, flame throwers. It’s as if the entire infantry brought knives to a gun fight and the carnage just goes on and on. You could argue that the battle sequences are too long or that the images depicted are graphic and gratuitous. You could argue the same thing about battle itself. By the time night falls and fighting stops, the audience has a palpable sense of the reality these men faced.

When the dust settles, Doss throws himself into the work he came to do. Scanning the battlefield for any signs of life, he attends to every wounded man he finds, then uses ropes to lower them down the side of a cliff to the camp below. It is an exhausting and solitary process, but Doss pushes forward, repeating the mantra, “just one more.” By morning, “just one more”, has saved dozens of soldiers who had essentially been left for dead. At this point it is painfully obvious that everyone was wrong about Desmond Doss.

Though Hacksaw Ridge could be categorized as a war film, war is somewhat incidental to the story. At heart the film is about being different, the importance of being true to oneself, and reconsidering our perceptions of others. As Desmond Doss proved, the guy you think is a weirdo might just save your life.