In all seriousness, I was truly floored by how good this movie was and how happy it made me. 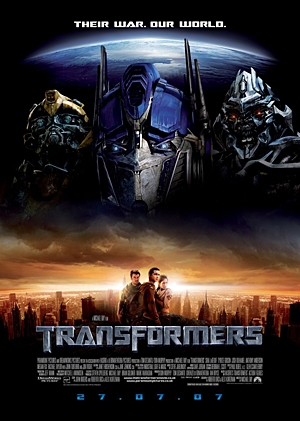 Sweet mother of all that is good and pure in this world, Transformers is by far the best summer movie of the year. Hands. Down.

I was transformed into a fan!

It’s Michael Bay at his finest!

It’s the best time you’ll have at theaters this summer!

This is the movie for which the entire computer-animation industry was created!

And if you think you’ve seen all the good parts in the trailers, think again!

[Note: Yes, I am purposely writing those statements as little pull-quotes which can be slapped upon the film’s subsequent marketing endeavors. Not that it’ll need any more marketing; I expect maaaaaaaaaaaassive box-office numbers.]

In all seriousness, I was truly floored by how good this movie was and how happy it made me. I was never really an avid viewer of the animated series and had only the most-cursory knowledge of the characters, so it’s not like I sat down in the theater as a rabid fan chomping at the bit. I knew director Michael Bay would deliver a big, fat, loud, flashy popcorn movie, and he did not disappoint. The eye-popping action begins about 2.5 minutes into the movie (I actually checked my watch) and doesn’t let up for more than two hours and 20 minutes. Bang for your buck? Heck, yeah!

The always entertaining Shia LaBeouf stars as Sam Witwicky, an average teen whose family legacy is linked to an intergalactic war between two races of hyper-advanced robots, the Autobots (the good guys) and the Decepticons (the meanies). Both are trying desperately to find the “Star Spark,” a mysterious cube that will allow its possessor the power to take over the universe, and it’s up to Sam to help the heroes and defeat the villains or all of humanity will be toast. While he and his hawt new friend (Megan Fox) scramble to stay alive stateside, a group of soldiers (including Josh Duhamel and Tyrese Gibson) in the Gulf find themselves under attack by some decidedly persistent—and indestructible—machines with minds. All the while, the Secretary of Defense (Jon Voight) and a hangar full of computer geniuses try to figure out what the frick is going on.

Transformers fans will not be disappointed—all of the most popular ‘bots are present (and, in some cases, updated), including Optimus Prime (a gleaming 18-wheeler), Bumblebee (Sam’s yellow Camaro), Jazz (a Pontiac Solstice), Ratchet (a Hummer) and Ironhide (a beefy pick-up truck). Of course, what the heroes be without formidable foes? So, batting for the other side are: Megatron (who morphs into an alien aircraft), Starscream (a Raptor jet), Barricade (a police cruiser), Bonecrusher (a Buffalo MPCV) and Frenzy (a boombox). Basically, it’s a whole lotta super-cool, super-fancy metal flying around the screen. The climactic fight sequence between the Autobots and the Decepticons defies description.

Watching Transformers, I had the same feelings I did the first time I saw Robert Patrick’s liquid villain in T2: Judgment Day, or the dinosaurs in Jurassic Park, or the titular ship going down in Titanic: WOW. I’m not exaggerating when I say that the effects in this film are stunning and seamless—everything, and I mean everything, looks real. More than once I found myself thinking, “HOW did they DO that??”

But in addition to its impressive action and visuals, the movie is really, really clever. I’d call it “funny,” but I fear that will somehow cheapen this sentiment. The dialogue, some of which was improvised, is quick and smart. Yes, some of it is also cheesy, but having people like LaBeouf, Anthony Anderson, Bernie Mac and a deliciously nasty John Turturro sparring (verbally) onscreen just made me grin. There are just as many laughs as awestruck gasps in this one.

When all was said and done, and Transformers ended, the theater—filled with about 700 people—ERUPTED into applause and cheering. I have never experienced that at a non-festival screening before. Ever. Make of that what you will but I, for one, definitely think this is a cheer-worthy flick, start to finish.