If you take it on its own “inspired by a true story” terms, Eight Below successfully manages to be exciting, often unpredictable, adventurous, and at times extremely sad. 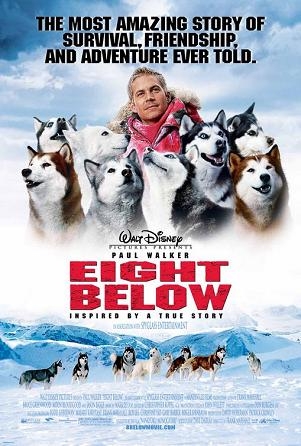 Let me just start by saying this: If I had watched Eight Below in the comfort and privacy of my own home, I would have been ugly-crying. None of this shifting in my chair, blinking furiously, trying to keep my chin from visibly trembling. I could barely take it. I don’t think I’ve sniffled so continuously at a critter movie since the 1994 adaptation of Black Beauty. I was SO wanting to relax and start blubbering about these poor dogs, but you know, I try to have a little composure in public, people! As it was, the whole front of my shirt and my sleeves were wet by the end of the movie.

That said, I was extremely surprised by Disney’s live-action adventure Eight Below. I was expecting Snow Dogs II (shudder), but instead got an extremely enjoyable snowy tale more along the lines of White Fang or Never Cry Wolf. Naysayers will cry that this film is a fact-skewing remake of a 1983 Japanese film called Antarctica (based on a true story). But let’s face it—that movie is almost impossible to find, and, personally, I had never even heard of it. If you take it on its own “inspired by a true story” terms, Eight Below successfully manages to be exciting, often unpredictable, adventurous, and at times extremely sad.

The story efficiently introduces a handful of people (among them Paul Walker and Jason Biggs) who work at an Antarctic science station. Just before winter sets in, they are pressured to host a visiting scientist (Bruce Greenwood), who has a big grant, and thusly gets what he wants. Unfortunately what he wants is a meteorite in a top secret, difficult-to-reach region. Paul (I’ll just call them by the actor’s names) is reluctant to take Bruce out there because of the danger, and even more reluctant when it is decided he’ll have to use his beloved dog sled team to get there. But off they go.

A winter storm comes in, and they have to abandon their expedition. Of course while they are out there, the men have a couple life-threatening accidents, and it is shown very clearly that it is the dog team that pulls them to safety every time. By the time the dogs pull them back through the storm, one man is on his deathbed, and the other needs hospitalization, so the entire team at the base is ordered to be airlifted (without the dogs… no room) to McMurdo Station. The pilot tells Paul she’ll go back for the dogs, but she never gets the chance. McMurdo orders all planes to be used for evacuation from Antarctica before this huge storm blocks the base from airlifts for the season. So the eight dogs are left behind, securely chained up, awaiting the quick rescue that never comes.

Part Two. This is where Eight Below becomes fabulous, and it is all because of those furry beasts! These eight dogs act circles around Paul Walker (who is actually pleasantly tolerable in this film). The second half alternates between Paul, back in the States, agonizing over his abandoned dogs, and scenes of the dogs and their survival through the brutal Antarctic winter. They have their share of scavenging, desperation, scares, and even some playful frolicking to pass the time. And, yes, if you have ANY empathy for the soft creatures of this world, there are things that happen to these doggies that will make you cry. Don’t say I didn’t warn you.

Despite a few sticklers—like showing winter with bright sunshine instead of 24-hour darkness; and the annoying fact of Jason Biggs’ occasional presence—I found much to recommend about Eight Below. The scenery is gorgeous. The filmmakers actually seem to pay attention to realism in the way the humans and dogs have to survive in those surroundings. The affection for a man and his dogs is wonderfully real.

And the dogs? These are definitely what any dog owner would call GOOD DOGS. And we all know that is the ultimate compliment they can get!