Just when you think you have the movie figured out, perceptions slowly start to twist, and the tone changes from pulp thriller to something darker and meaner.
By Lindaon July 12, 2016
0 Comments
Our Rating 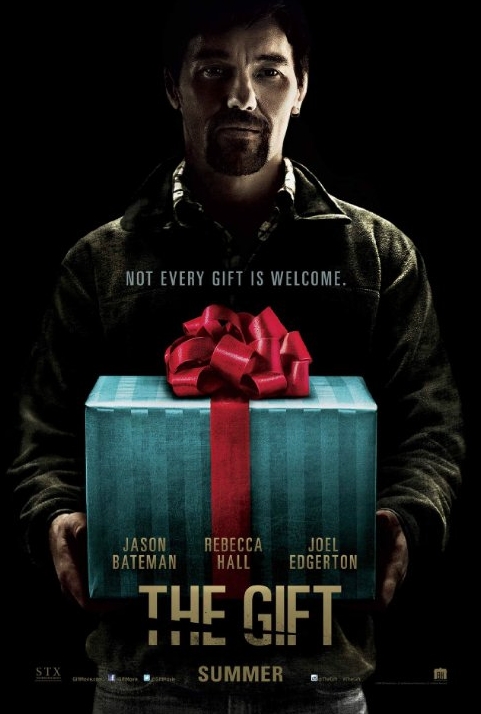 Just before watching this movie, my movie-pal and I were discussing how some people genuinely grow and change. But, I argued, show me a teenager, and I can show you the adult they will become. For most folks, the inherent core of their being is already fully formed, for good or for bad… and therein lies the idea behind the thriller The Gift.

A successful, childless couple move to Los Angeles from Chicago. Simon (Jason Bateman, with his sly, slippery charm) has taken a new, upwardly mobile job, while his wife Robyn (That Nice Rebecca Hall) is kind of in limbo. Simon drops hints at company mixers that they are trying to start a family, but you can sense in her hesitancy that it hasn’t been so easy. But Simon is in his element, with his new job, their great mid-century glass house, and a beautiful wife at home. So, count him surprised when a childhood classmate named Gordo (Joel Edgerton) recognizes Simon in a store. Pleasantries are exchanged, but even Robyn can sense that the meeting is a little… awkward.

It is unclear what relationship the two men had 25 years ago in high school. Simon doesn’t really want anything to do with “Gordo the Weirdo” but won’t tell his wife why. Gordo, on the other hand, seems well-meaning, if a bit too eager to welcome them to the neighborhood, with his gifts left on the porch, and his disarming habit of “dropping by”. But the truth is, Robyn is kind of depressed and lonely, and Gordo doesn’t seem SO bad. Simon, on the other hand, wants to dump their new/old friend.

The first half of The Gift unfolds like a classic stalker-thriller. There is a particular scare that you can see coming a mile away, yet still the entire audience (myself included) screamed (followed by a 10-minute giggle fit in my case). But just when you think you have the movie figured out, perceptions slowly start to twist, and the tone changes from pulp thriller to something darker and meaner. Who is the victim here? Who is the creep?

I think The Gift so effectively manages to tap into the audience’s unease because everyone either knew a Gordo, or WAS a Gordo in high school… that one kid that everyone remembers but kind of wishes that they’d forget.