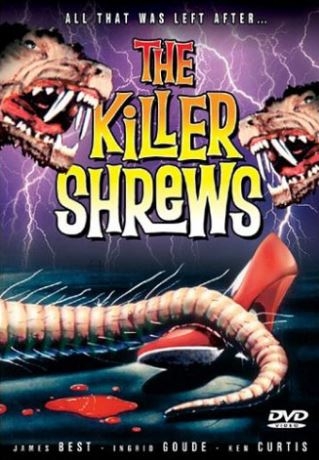 The Killer Shrews is a classic tale of seafaring folk and deliveries gone awry. You know how it is when you and your jolly first mate arrive with supplies for the inhabitants of a remote island, only to find that they’ve walled themselves in with a funky looking fence that looks like something the pilgrims would have slapped together: normal! It makes sense, then, that you’d stay for awhile and visit, especially after someone asked if you wanted to hold their shrew. “Why, yes, I do want to hold your shrew and I’ll stay to dinner while I’m at it!”

Indeed our protagonist (if you can call him that) does stay for dinner, forgetting completely that he even came with a first mate, and then things get weird. Turns out there are a bunch of scientists living in the compound studying the shrinking of humans. Their genetic tinkering somehow resulted in giant killer shrews (sometimes pronounced “shews” by characters whose accents fluctuate wildly and reflect no identifiable origin), who are now running rampant and hungry on the island. They lust for human blood, and the only thing keeping them out is that crappy fence.

It will come as no surprise that while securing the boat and tying up the dinghy, the forgotten first mate becomes lunch to the shrews. Here it should be said that the killer shrews are clearly played by dogs wearing hideous rodent costumes with stringy, awful tendrils of hair. Close-ups reveal doggy snouts and teeth, and awkward prosthetic opossum tails dragging behind them. They are a terrifying lot, nonetheless, for you must keep in mind that this is an island full of idiots living in an inexplicable adobe rambler. And P.S.? A hurricane is coming.

Admittedly, I did not realize the gravity of the weather until I read the film’s synopsis after watching the movie. There is some rain and a bit of wind. A few shrews get over the fence and claw through that pudding-like adobe wall. All of this is small potatoes next to the dummies in the house. There’s the stunning Swedish scientist’s daughter who lives in constant fear of the shrews. There are the dopey scientists who keep taking their glasses on and off and declaring the need for autopsies (pronounced in a way I cannot replicate on paper) on bodies ravaged in front of them by shews…shrews…whatever. And finally, our hero, who manages to come up with a hare-brained scheme that actually saves the day. It’s a wonder they can piece together a thought between them, though clearly the quality of the thought is questionable.

The fact that The Killer Shrews is touted as one of Stephen King’s favorite movies is certainly a selling point, and it’s easy to see why King would enjoy it so much. It’s like dropping into an early black and white episode of Gilligan’s Island, without the benefit of a back-story, and then spending 69 minutes watching as a whole houseful of Gilligans are terrorized by giant shrews. Each character is dumber and more one dimensional than the next, and you can rest assured that no one on this island will be making a radio out of a coconut. The result is an inept mess that’s so bad it’s good. 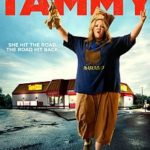 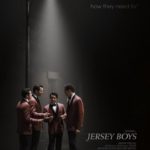