Here is one of those reboots that I don’t remember anyone asking for.
By Lindaon July 12, 2016
0 Comments
Our Rating 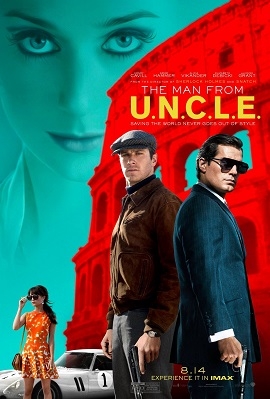 Now, it is not a good sign when I’m sitting there watching action scene after action scene, but am distracted by some pretty simple questions. Coming from the background of, well, no background with the original TV show, I found myself wondering: Who is “The Man” of the title (since there are two male leads), and what the heck does “U.N.C.L.E.” mean? Let’s just say, I’m guessing The Man is the ‘Merican (Am I right? High five!), and, for those of you wondering, the “U.N.C.L.E.” part is explained in the very. last. scene. But it is explained by none other than Hugh Grant! Personally, I’m looking forward to the feature-length commentary by Hugh Grant, where we can just turn the sound down and listen to him jabber for two hours about the handful of minutes that he appeared in this quite pretty, but very strangely uninteresting, DOA movie.

The Man, I presume, is a certain square-jawed CIA agent named Solo (played by square-jawed Henry Cavill). Now, I’m just going to interject that Cavill is a Brit playing an American. That’s fine, except his strangely exaggerated way of talking immediately conjured up Peter Graves in Airplane!… and once I thought of that, I couldn’t get the impression out of my head (“Solo, do you like movies about gladiators?”). Anyway.

It is 1963, in the heat (or chill, if you will) of the Cold War. Solo suavely creeps into East Germany for some mission, and encounters a hot German mechanic named Gaby (Alicia Vikander), as well as the less-friendly Russian agent Ilya (Armie Hammer), who wants to kill him. But Solo and Ilya, after beating the crap out of each other, are forced by their superiors to become partners (along with Gaby, of course), in a quest to make sure that a nuclear bomb does not fall into the wrong hands: aka the world-power-hungry Italian socialite Paris Hilton. OK, so it is not Paris Hilton, but it may as well be, because actress Elizabeth Debicki is a dead ringer for Hilton in the film. This may or may not have been done on purpose.

Bascially, The Man from U.N.C.L.E. appears to be director/screenwriter Guy Ritchie’s ode to all things cool and suave in the 60s. On that end, he does a pretty good job. The European locations look great, the women are stylish and beautiful, Cavill looks unsurprisingly hot in a suit, and the soundtrack, I have to say, it notably nifty.

But why does it feel like such a hot mess? Along with the weird Airplane! impression, Cavill struggles with the comedy and has to give the aura of being a ladykiller without actually having any chemistry with anyone. Then poor Armie Hammer, whom I’ve liked in movies like J. Edgar and The Social Network, has to have a forced Russian accent, glower a lot, and punch people. The casting choices of Cavill and Hammer inevitably seem kind of odd, like the director got his 3rd and 4th choices for each role, then cast who he could without actually testing the actors together beforehand. I think my movie buddy summed it up the best: “I felt like I was watching Superman and the Lone Ranger trade witty quips for two hours.”