Co-stars James Franco and Jonah Hill eschew their usual frat-boy-humor antics for serious drama in this big-screen retelling of the real-life relationship between accused killer Christian Longo (Franco) and journalist Michael Finkel (Hill). The result? A surprisingly effective thriller that shows off the duo’s acting chops but, unfortunately, starts to unravel as it goes on. 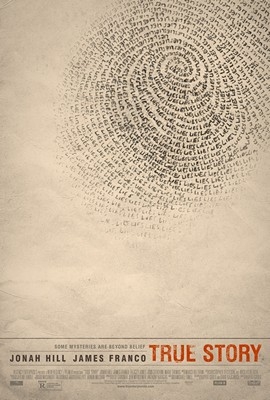 Based on Finkel’s memoir of the same name, True Story centers on Longo, a seemingly upstanding husband and father, who’s accused of murdering his wife and three young children, then fleeing to Mexico, where he’s subsequently apprehended. Once in custody, he identifies himself as Michael Finkel of The New York Times. Almost simultaneously, Finkel himself is packing up his desk at the Times, having been fired for fudging details in a cover story on modern-day child slavery in Africa.

When the real Finkel gets wind of the faux-Finkel, he smells a story – one that could reignite his seriously stalled career. He contacts Longo, the pair begin corresponding and, soon, a curious and sort-of-creepy friendship develops between the pair. Finkel is desperate to get the scoop (did Longo really kill his family? what’s he hiding?), while Longo, behaving a bit like an ingratiating fan boy and in exchange for granting Finkel exclusive rights to his story, picks Finkel’s brain in an effort to learn how to write better.

The back and forth makes up the bulk of True Story and, for the first hour or so, the film is riveting. But, gradually, it starts to get confusing. I won’t reveal the plot twists just in case you’re not familiar with what happened in reality, but suffice it to say that I had no clue why Finkel seems to become more and more frantic as Longo’s trial date inches closer, and I had absolutely no clue as to what Longo’s actual motives were – I had to Google the real events after seeing the film in order to understand what I’d watched onscreen. And that means there were some storytelling gaps that could prove problematic for some viewers.

Though bearing no resemblance to the real Longo (who looks a bit like a clean-cut 90210 extra), Franco nonetheless creates a fascinating, multi-dimensional, charismatic character super-skilled at keeping everyone (from Finkel to the audience) guessing. It’s easy to see why others would be drawn in to his case. Hill, meanwhile, is a little less convincing – I kept seeing him as an eager college reporter, not an award-winning thirtysomething writer – but still solid, and his offscreen friendship with his co-star no doubt helps cement the believability of their characters’ connection. Felicity Jones, however, gets a bit of a short shrift as Finkel’s girlfriend, who sort of orbits the proceedings without much of a purpose until making a somewhat sudden move that feels out of place. (Again, trying to avoid spoilers.)

While not as tightly assembled as it could have been in its latter half, True Story still possesses enough suspense and impressive performances to make for entertaining viewing, and marks a confident debut from first-time feature director Rupert Goold.

The Blu-ray release includes a number of featurettes, including “The Truth Behind True Story“, “Who is Christian Longo?” and “Mike Finkel”… all of which, as a viewer, I’d hope were talking about the real-life case, but most of which just serve as a summary of the characters and the plot shown in the movie. Looks like you have to turn to Google for more info on the real-life events. Additionally, there are a bunch of deleted scenes, most with Felicity Jones ending up on the cutting room floor as Mike’s wife Jill. However, the Alternate Ending is quite interesting, along with the commentary by director Rupert Goold. Without giving too much away, the alternate ending includes a car chase (and crash), birth, and implications of death… all within a few minutes. For a film that is mostly cerebral and psychological, I think it was good that the director listened to the test audiences who felt the tone was right out of a different film. Writers, editors and film students should take note, because for once, it is interesting to compare the two endings.