I remember seeing a commercial for this movie when it was out in theaters. Richard Gere was in a darkened room, looking notably nervous and paranoid as he hesitantly held a phone to his ear. He asks into the receiver, “What am I’m holding in my hand?” and a devilishly evil voices hisses in his ear, “Chaaaaapsssstick!!!” Now, weird product placement or no, the mention of lip balm as the end-all be-all climax of a scene can only induces giggles out of context. But! The Mothman Prophecies turned out to be much creepier than I expected. 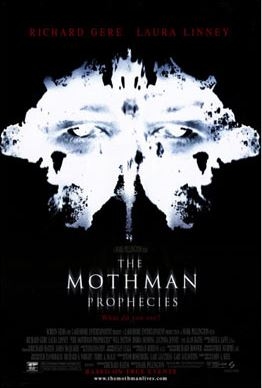 Richard Gere plays a Washington Post reporter whose lovely wife (Debra Messing) tragically dies shortly after a car accident right after they purchase an American Dream home. As she lingers dying in the hospital, she furiously sketches creepy pictures of a bat-like monstrous creature that she claims to have swerved to miss while driving. She dies, Richard Gere is distraught, and two years pass.

Nearing the anniversary of his wife’s death, Richard (does it matter what his character’s name is? really.) flips out one night, drives an inexplicable distance (even to him) in a short time, and ends up in rural West Virginia where his car up and quits in perfect X-Files fashion. Let’s just say, if the next scene is typical West Virginian hospitality to stranded travelers, well, I’m going to keep my car tuned up next time I pass through!

Anyways, you strand a reporter in a strange small town, and you must have a story ripe for investigating. Turns out that people in this town of Point Pleasant have been reporting strange happenings, spooky sightings, and voices from their sinks telling them the future (I’m not kidding). Laura Linney plays a straighter-laced version of Marge from Fargo (fuzzy hat and all) as the locally trusted policewoman trying to make sense of it. Turns out many of the spooky sightings and visions all have to do with the same frightening winged creature, seen throughout history in different countries, and referred to as the Mothman.

The Mothman Prophecies is not a blood-and-gore horror movie, and barely a thriller, as it is actually rather slow moving (a minor complaint by my cohorts). But it touches upon a frightening apparition that has, in real life, been spotted throughout history. This film is all the more intriguing as it was based on true events in the 1960s in Point Pleasant, WV. The unfolding of this story I found fascinating. And just when you think the film is going to peter out and lose steam, the movie throws in a whammo of an absolutely horrific ripped-from-the-news finale that had me gnawing my hand off.

When a movie based on true events leaves you wanting to know more when it’s over, it has done its job in my book. The Mothman Prophecies is a nifty mystery and suspense film with a dash of modern mythology and unexplained phenomenon. The moral of the film? If your sink starts talking to you, maybe you should listen.