“Prepare the standard rich and famous contract for Kermit the Frog and Company.”
By Jenniferon August 15, 2013
0 Comments
Our Rating 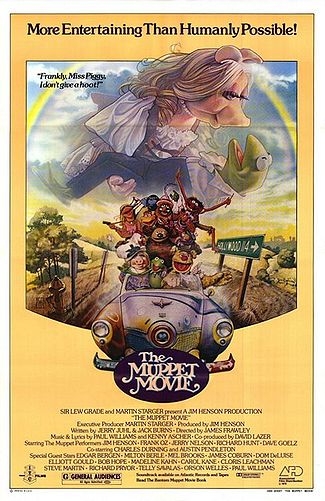 Revisiting The Muppet Movie was a strange experience for me. Though I remembered it fondly, my sense of excited nostalgia was tainted by a vague feeling of dread. Too many Muppet movies had been a source of disappointment over the years, but I could never quite remember which is which. One Christmas I waited all day for a Muppet movie to come on TV, then wound up wandering listlessly from room to room while it was on, half thrilled to see my beloved Kermie and friends, half bored out of my mind. I was probably six. Another Christmas I nearly went insane attempting to watch A Muppet Christmas Carol. I was probably twenty-six. What if watching The Muppet Movie was like that?

I’m happy to report that the very first scene won me over with Kermit singing “The Rainbow Connection” in a beautiful, mossy Jim Henson swamp. I thought it couldn’t get any better, but then Dom DeLuise rowed up in a canoe, playing a Hollywood agent. Dom DeLuise, the light of my childhood! I just about burst into happy, nostalgic tears, but I managed to save those until the very end of this enchanting classic.

Acting upon Dom’s advice, Kermit decides to take his talent and head for Hollywood. We get to go along for the ride, and meet up with all of the Muppets we know and love – Fozzi Bear (“Wokka Wokka Wokka”), Gonzo and his chicken/wife, Rowlf the Dog (who lives alone and takes himself on a walk every night), the Muppet Band, and, of course, Miss Piggy, who reminds me strangely of Kathleen Turner in Body Heat.

Fozzi has a cool old Studebaker that he learned to drive through a correspondence course. He pulls over to offer Big Bird a ride to Hollywood, but Big Bird is on his way to New York City to “try to break into public television.” Can you beat it? Muppet humor is strangely adult for being so kid-friendly, but that’s why it holds up so well.

Throughout the journey Kermit is plagued by the evil Charles Durning. He believes Kermit would make the perfect spokesfrog for his chain of frog-leg restaurants, and will stop at nothing to ensnare poor Kermie. Luckily, his new friends come to the rescue every time.

Here I must just pause to say that Kermit has to be one of the cutest things ever. It’s no wonder Miss Piggy falls in love with him at first sight. Is anything more adorable than Kermit on a bike? Not unless you count Kermit wearing cowboy boots and spurs! And the expressions on that little felt face – good grief, he’s practically human! If it takes kissing frogs to find Prince Charming, I’ll kiss Kermit any day.

In addition to all of our lovely Muppet friends, Kermit runs into oodles of celebrities in his travels: Paul Williams, James Coburn, Carol Kane, Madeline Kahn, Telly Savalas, Milton Berle, Elliott Gould, Edgar Bergen, Bob Hope, Richard Pryor, Steve Martin, and Mel Brooks. It seems that all the major stars of 1979 were more than willing to show up for Jim Henson, and who can blame them?

The world of the Muppets is striking in its handmade beauty, especially in contrast to today’s computer generated animation and high-tech special effects. At one point Gonzo is carried away on a bundle of helium balloons, and later, while sitting under one of the loveliest starry skies ever captured on film, he says wistfully, “I wish I had those balloons.” His sentiment could not have been more appropriate.

In addition to being a welcome walk down memory lane for those of us who grew up with the Muppets, The Muppet Movie is a poignant film about following your dreams. Do the Muppets make it to Hollywood? What do you think, Silly! Orson Welles himself takes one look at them and orders Cloris Leachman to “prepare the standard rich and famous contract for Kermit the Frog and Company”. Now if that doesn’t make you laugh milk out your nose, I don’t know what will.

The Nearly 35th Anniversary Blu-Ray Edition of The Muppet Movie comes with a digital copy of the film and a slew of extra features. Press pause for a fun Disney Intermission or join in for a “Frog-E-Oke Sing Along”. “Jim Frawley’s Extended Camera Test” features never before seen footage, and Pepe the Prawn brings us a strangely jarring look at Kermit’s life today. Clearly created after Jim Henson’s death, this segment (also found on the 25th Anniversary Edition), feels anachronistic, but may be fun for young viewers with less attachment to the original Muppets and their voices. Other features include “Doc Hopper’s Commercial” and original trailers.