The Scent of Rain: A Conversation with Christine Jeffs and John Toon 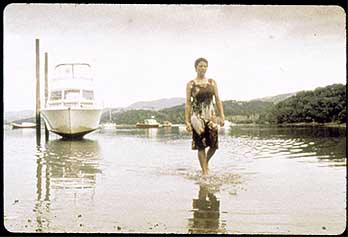 “When the rain came, it came first as the scent of rain…” – Kirsty Gunn, Rain

Like a slightly faded and worn photograph from the seventies, Christine Jeffs’ new film Rain, based on the acclaimed novel by Kirsty Gunn, is a hazy dream of a coming-of-age story. Looking at the world through the eyes of Janey, a 13-year old who can be both brazen and bold with adults, but affectionate and innocently playful with her little brother Jim, Rain portrays a family’s last carefree summer at a beach cottage, where small moments of carelessness and recklessness lead to tragedy.

Acclaimed for its evocative and beautiful use of language, the novel was thought by many to be unfilmable. In the book, the kids would play unattended at the beach by day, while the adults spent the evenings partying in drunken spilling-across-the-lawn revelry with the neighbors. But as the novel was driven by mood and setting rather than dialogue, the challenge was to transfer the almost slight story to a feature length film, and still maintain the somewhat wistful and melancholy feel of the book. 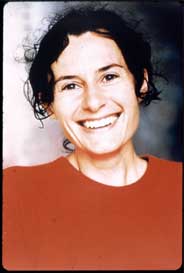 “I was naively not put-off by the fact that other people said it couldn’t be transferred to the screen,” says director Christine Jeffs. “While [the book] was very densely poetic, it also dealt with some quite big themes about growing up and families.” Describing the choice to have entire scenes filmed without dialogue, for instance extended scenes of Janey and Jim playing on the beach, or mother Kate lying languidly with a drink in her hand in the late afternoon sun, Jeffs says, “I really believe in the details of everyday life enough to tell a lot, and the whole visual sense to communicate to audiences—not need to have it all in the dialogue.”

The striking look of the film can be credited to cinematographer John Toon, who was also involved with the project from the start as associate producer. With its washed-out colors and hand-held intimacy, watching Rain is like watching one family’s home movie from the summer where everything began to unravel. “We wanted the film to be real, and have a sense of immediacy,” says Toon about Rain, “But a lot of [the look of the film] is borne out of the fact that we wanted to shoot the film on 16mm. That was as much a budgetary choice as a stylistic choice.”

A 16mm camera is also less bulky and intrusive than most standard movie cameras. This allowed for surprisingly natural performances by Alicia Fulford-Wierzbicki and Aaron Murphy, who played Janey and Jim, respectively. “We wanted the camera not to intrude on the scenes… we didn’t want the kid actors to feel that they were a part of a big Hollywood deal.” Toon continues, “The camera would literally sit on my shoulder like a cat, and I would sit on a chair at the dinner table with everyone else, and I would just be there and observe.” 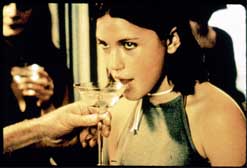 Much of the underlying tension in the film is the unspoken competitiveness between budding-into-womanhood Janey, and her still-sultry, though desperately clinging to her sensuality, mother Kate. Both the girl and the woman vie for the attentions of a sexy beach bum/photographer named Cady (Marton Csokas), who literally sails into the community for the summer.

Wanting a native New Zealander actress to play the crucial part of Kate, but lacking the funds to audition any ex-pat actresses, Jeffs scored a coup when Sarah Peirse, who was living in London, came upon the script faxed to her by a friend. Peirse, known mainly to international audiences for playing the dowdy and doomed mother in Peter Jackson’s cult 1994 film Heavenly Creatures (which launched the career of Kate Winslet), seems initially an unusual choice to play a sexpot lush of a mother. But her performance of simmering sensuality, underlying desperation, and washed-up bitterness balance perfectly with the naivete and building confidence of Janey. Says Jeffs of casting Sarah Peirse, “She is sexy, but not sexy in a predictable way…. She’s got this lovely, kind of soft face, but she had this kind of hard haircut. There’s a whole lot of contradictory things about her, but she seemed very real, and very of the time.”

But the core of the film is carried on the shoulders of 14-year-old Alicia Fulford-Wierzbicki, playing Janey. Janey’s summer progresses from innocent afternoons playing with little Jim on the beach, to curiously watching from the shadows of her parents’ rollicking beach parties, to her pursual of much older man (whom her mother has also set her eyes on). That’s a lot of heavy material for such a young actress in her first major film role. “[Alicia’s] a very clear thinker, and she’s very grown-up in many ways,” says Jeffs. Alicia, as well as young Aaron Murphy (Jim), were coached heavily before filming began; plus the story was largely shot chronologically, allowing the children to experience the natural progression of their characters’ development. Jeffs has nothing but praise for her young actors, describing Alicia as “incredibly mature” and Aaron as “fresh and original.”

Like a storm cloud brewing, Rain‘s mood is like a change in the weather hinting at an impending downpour. Director Christine Jeffs shows in her film that the details and moments of everyday life, no matter how small, can brew towards their own deluge. With nostalgia flavored by lost innocence, Rain illustrates that life-changing events are not self-contained—they are the culmination of the many events, big and small, that came before. 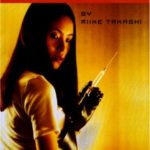 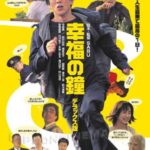